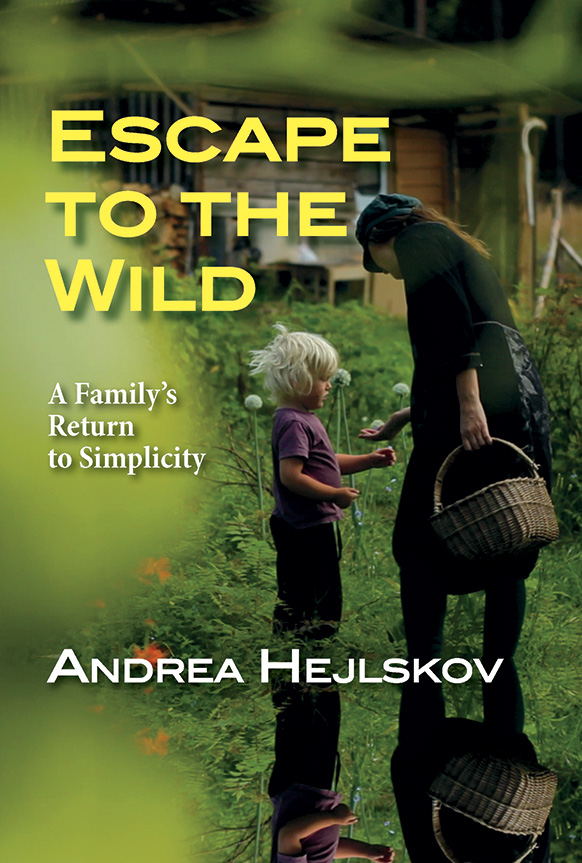 Escape to the Wild: A Family’s Return to Simplicity
By Andrea Hejlskov
Published by Caitlin Press Andrea Hejlskov was certain of one thing: life could not continue as it was. She and her husband had become disillusioned with their jobs and the pressures of urban living, their four children were spending too much time alone with their computers, and family conversations had become elusive. No matter how fast they ran they never really got anywhere; no matter how much they worked they never had enough money. Facing a constant feeling of failure and always falling behind, the family made a bold decision to leave it all behind and return to nature.

Escape to the Wild: A Family’s Return to Simplicity (Caitlin Press, 2019) is the remarkable true story of a family that dropped everything to start life anew. Documenting their first year in the wilderness, the book is an unglamourized version of living off-grid. Andrea writes with brave humility and humour about emotions, family dynamics, failed projects, her many doubts, and the mounting challenges they faced.

On why it was important to write of this truth, Hejlskov says ‘toxic positivity’ is something that hinders our development as a culture right now. “We need to change, not at least due to climate change, but as long as our images of ‘authenticity’ and ‘nature’ are so skewed and twisted, romanticized and idealized, we will not be able to change,” she says. “Nature is not paradise. Being authentic is not easy. Salvation does not exist. Quick fixes do not exist. This is the lie our culture told us. I wanted to speak against that. I wanted to provide honesty in a culture of lies.”

Both a poignant memoir and passionate critique of modern life, Escape to the Wild is a powerful reminder that we can choose to lead the life we live. Although climate change is global and dramatic, its effects are also experienced locally by people who are struggling to understand the impacts of climate change on their daily lives. Recent years have seen a proliferation of writing with dystopian elements, climate fiction, or “cli-fi”, and stories of post-apocalyptic worlds.

“The apocalyptic images are not just alarmist rhetoric: by pretty clear scientific consensus, there is ample reason to be afraid,” she says. “Fear can help inspire courageous, determined acts. We need only look at the current wave of young climate activists who are taking to the streets to protest against government inaction in reducing carbon dioxide emissions or at the Indigenous Elders who are leading the charge against the expansion of fossil fuel developments across the continent.”

Fearmongering in the media can also be incapacitating and create widespread anxiety. Instead, Rising Tides emphasizes the need for intimate stories and thoughtful discussion with more than 40 works of short fiction, memoir, and poetry. Writers of all stripes pick up their pens to defend Canada’s environment—an act of resistance in the wake of the Trans Mountain pipeline, Site C Dam, and other ecological threats.

“The stories that we tell about climate change have an especially important role to play in public conversation,” Sandilands adds. “Literary works and other kinds of storytelling can help us to notice, feel, understand, talk about, and respond to the unfolding realities of climate change in ways that better acknowledge the personal complexities of our social and environmental relationships.”