A Flight Where Wild Things Are 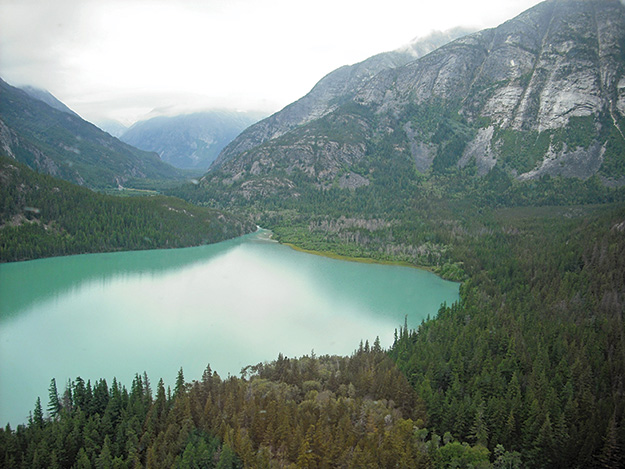 On August 10, 2019, I hired Mike King of White Saddle Air to take my family on a helicopter ride down the West Branch Valley of the Homathko River. I wanted to show my grandkids where their dads were born and grew up on our trapline in the shadow of Mount Waddington, 80 km south of Tatla Lake.

Because there were 12 of us, it took two flights into some of the wildest country British Columbia has to offer. The wilderness is still intact because it’s so rugged and remote.

Richard Jones and I bought the trapline in the mid-1970s. We were part of the back-to-the-land movement seeking a simpler way of life. For me, it was a spiritual quest to live among the largest predators on the planet. Cougars, wolves, and grizzlies were our neighbours, and I made my peace with them.

Owning a trapline meant we were obliged to trap. This was very weird for a young man born and raised in manicured Victoria on Vancouver Island, but a couple of old-timers up the valley, Bern Mullin and Annie Nicholson, showed us the ropes. They once trapped our line in the 1930s.

In the middle of January 1978, my life changed radically. Christine Peters snowshoed and hitchhiked 150 kilometres across the Chilcotin to come and live with me. She would not be denied. One of the first things she did upon arriving at my remote cabin on Crazy Creek, was strip down and jump into the river through a hole in the ice. Of course, not to be outdone, I followed suit. That’s how things started for us.

A year later, Christine was pregnant. Jim and Jeanie Fell invited us to have our baby at their place further up the valley, closer to civilization. So, we accepted their kind offer. On May 17, 1979 our son Junah was born in a tipi at Sapeye Lake.

Since we were committed to defining our own reality, Christine and I rebranded ourselves as Sage and Yarrow. Admittedly, this is odd. But as I jokingly say, we were out in the wilderness reinventing the wheel anyway, and rediscovering fire. To give Junah the last name we wanted, I legally changed my name to Sage Birchwater.

Two years later our second son, Shiney, was born at Twist Lake. We’d built a homestead by that time with a cabin, barn, gardens, and a herd of goats. The dog asleep on the mat in front of the door started barking when Shiney gave his first cry. He was obviously perplexed how this stranger entered his domain without him knowing.

So, we had a life there in the wilderness, richly steeped in hope for freedom and self-determination as our children grew healthy and strong. We tapped birch trees for syrup, made yogurt from goat’s milk, grew productive gardens, and tanned all the fur we caught. Yarrow sewed hats and other garments with our marten skins, and I carved wooden spoons, which we sold or traded to sustain ourselves.

It was a precious moment in time walking a fragile balance in the natural world. I find it miraculous we had the freedom to be there and learn what we could from Mother Nature. She was indeed our best teacher.

One winter while walking the river ice I had this revelation: It’s easy to fool your fellow humans, but you can’t bullshit the river. One false step could end your life.

In that wild place we lived in solitude without radio communication with the outside world until our kids were old enough for school. Then in 1986 I pulled my traps for the last time. I’d killed enough animals and was ready for something different. Over the years I’ve been asked about my trapline and my response is invariably the same. “The trapline is doing great. The animals are thriving.”

Flying over the cabin where Shiney was born at Twist Lake, the grandkids had their noses to the chopper windows. Some were filming and others were snapping photos. I was amazed at the unrelenting liveliness of the natural world. Twist Creek has carved a new channel across the flat threatening to reclaim our homestead.

I find it miraculous we had the freedom to be there and learn what we could from Mother Nature. She was indeed our best teacher.

Granddaughter Acacia, now 15, was touched seeing the cabin we built when her dad was a newborn. “I want to live there,” she said whimsically. I advised her to go live with her grandmother for a year and then decide.

I’m not sure what impact the flight had on the other grandkids. Hopefully, it sowed seeds of wonder, inspiration, and possibility as they glimpsed the world their dads grew up in. Will it inspire them to follow their dreams off the charts where anything is possible?

In 1979 there was one Birchwater. Now there are a dozen: Junah, Shiney, Lana, Jen, Caleb, Acacia, Owen, Xavier, Wesley, Asher, Capri, and yours truly.