Art Exhibit “Everything is Shining” Features Anthropocene by James Savage 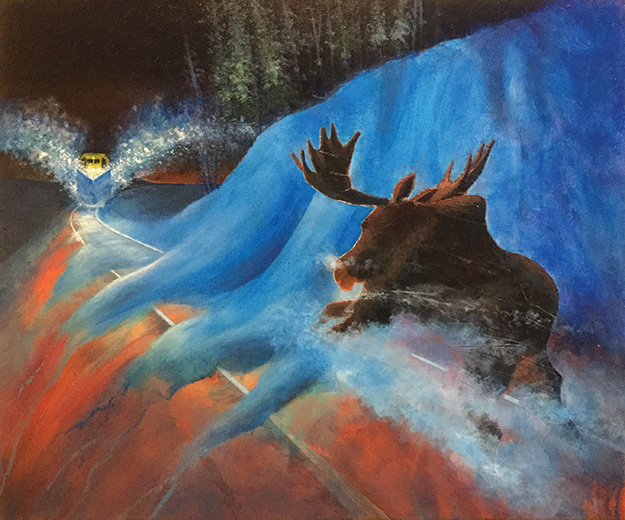 Human disconnection from and reconnection to nature is the main theme of “Everything is Shining,” artist Jim Savage’s recent exhibition in Wells and Williams Lake. The painting Anthropocene (after Alex Colville’s Horse and Train) is one of the most compelling pieces.

The term Anthropocene is increasingly used to describe the current geologic era given the utter domination of humans. Savage’s painting is based closely on Alex Colville’s famous and haunting 1954 painting, which is usually interpreted as depicting mechanization/progress against nature, or free will vs. the inevitability of death, among other meanings.

Anthropocene is also informed by one of J.M.W. Turner’s most famous pieces, Rain, steam and speed – the Great Western Railway (1844). Please see both Turner’s and Colville’s images online.

On each side of Turner’s train, in the misty distance, are evocations of a dying agrarian past. A close viewing reveals a hare racing in panic before the rocketing train. The train tracks cross Colville’s and Turner’s pieces with almost identical angles, and Savage believes that Colville must have been aware of Turner’s piece, which commented on the environmental and social changes wrought by the Industrial Revolution.

Anthropocene is reframed from Colville’s flatland setting. A powerful, otherworldly bull moose charges at a train blasting snow aside (i.e., our 10,000 year “just-right” climate). The moose seems to emerge from the void, and its horns are modified to evoke human hands, supplicating or warding-off.

Likewise, there’s a hint of humanness in the mostly obscured rear legs. The snow plumes jetting out from the train’s plow, like a bird of prey or avenging angel, mirror the horns. The plow also references a profoundly earth-altering invention: agriculture.

Melting snow floods down the left embankment—a glowing slag heap, a vast emerging heat. The train implacably drives straight at the viewer—not the moose—out of a dark, red-tinged sunset sky. As the train tracks come forward, they dematerialize and enter the void, leading the train off the rails.