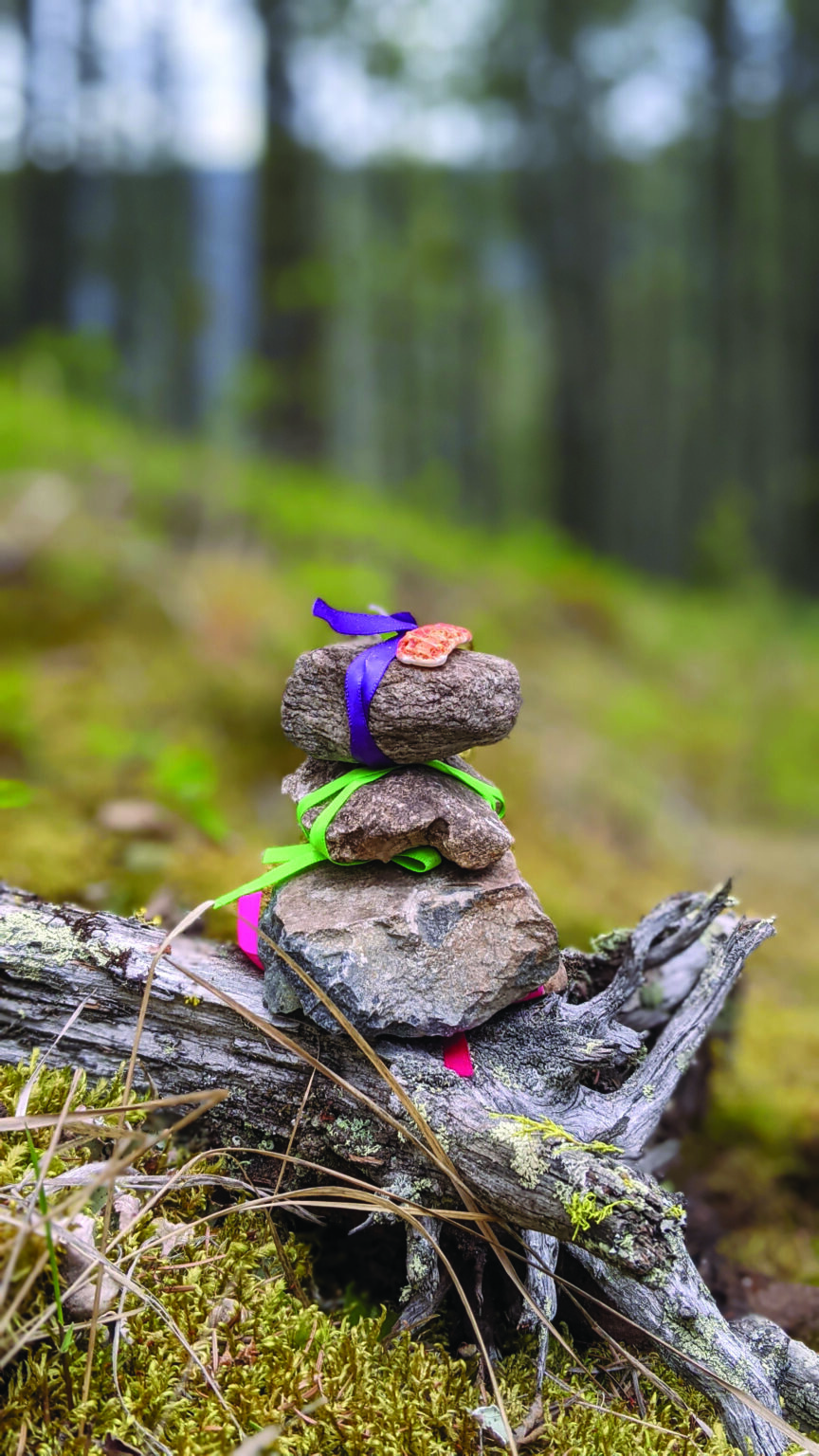 Single file, ten women snake the trail above the ‘Fraser’ River. They move along the dirt track up ‘Desous’ Mountain in Esk’etemculucw in the unceded territory of the Northern Secwepemc First Nations. They are mothers, friends, they are white women of European descent, they are climbing, and they are learning. I am one of them, raised in Canadian privilege, a white body with blue eyes, granddaughter of displaced persons from World War II. I put one foot in front of the other, moving towards something intangible on the mountain. I am thinking about decolonization.

I was taught by Curandera Grace Alvarez Sesma to make an offering of tobacco to the guardians of the land when a walk begins—at times, I forget to do so right away, and remember only when I am halfway along the trail. Other times, like this day on ‘Desous’, among community, I can feel foolish or shy, doubting that I should be the one to initiate the practice. The doubts are shallow. Truly, it is such a small gesture made to the land that holds and feeds us, the land that excites and inspires us. The offering doesn’t feel like enough, but I will continue because it is an embodied practice catalyzing a paradigm shift.

As we ascend, eyes scan the river valley: The beauty of the spring landscape is a song of nourishment. Green has bubbled up through the winter’s crust, and it stills our breath. We coo over wildflowers, naming them like our kin, sharing stories and scientific facts about the species. The ten women climb the mountain to offer gratitude, to gather and heal on the earth’s body, to remember that knowledge leaps out from canyons and rivulets, mosses, and old trees.

Social justice movements have taken decolonization beyond the concept of removing an imperial ruler from an occupied land. Today, current ideology recognizes the existing and ongoing psychological, economic, and cultural inequities in settler-colonized nations like Canada. It centres and defends Indigenous voices and rights because they are the Peoples most affected by the colonizing regime and its extracting appetite. Scanning the colonial system uncovers swathes of the population relegated to marginalization. Who has not been touched by a colonized mindset and encouraged to consume, conform, and disengage from land-base, culture, and ancestry? The reach of our current systems of economies and governance can be as unfathomable as the canyon we come upon as we hit the mid-point of the ascent up the mountain—sheer cliffs of brilliant stone drop deeply to the canyon floor, carved out so long ago and seemingly permanent. But rock and water hold teachings of change. Though we are living with systems that serve a powerful tier of society, the wisdom of the land, held by Indigenous Peoples as law, indicates that sustainability and reciprocity are the only path for survival.

It is easy to dismiss the group of women gathering stones, ribbons, and flowers for ritual on the mountain. Hippies, or witches, what impact can their actions have? I have a cultural memory: my Lithuanian ancestors were some of the last pagan Europeans to be Christianized in the 14th century. The state ordained a system that divorced land and spirituality and shunned land-based practices that informed intelligence and interconnectedness with place. The whole of Europe crept towards materialism, and now we are witness to another cycle, tearing the land away from Indigenous ‘Canadians’.

Our practice on the mountain is a remembering that we know alternative ways of being. Art and ritual carry the multi-dimensional awareness that material is more than matter—it is energy, webs of relatedness and relationships. In my work with the Community Arts Council of Williams Lake, we practice decolonizing by collaborating on upcoming projects like ‘We Acknowledge’, where local settler artists will engage with Secwepemc mentors to create work around the question: What is my role and responsibility as a visitor to Secwpemculucw? Mentors, like Floyd Dick of Esk’etemc, extend a hand to the artists and individuals willing to learn and explore the protocols of this territory. Our aim is for the artists to analyze the stories the predominant culture narrates, attending to the knowledge that these stories have served a purpose, and often, the truth was not readily revealed.

It can be uncovered. Take in work created by BIPOC voices, learn. Enroll in University of Alberta’s free ‘Indigenous Canada’ course, or a Deyen’s ‘Canadian History Through the Lens of Indigenous Women’. Read from a growing body of Indigenous authors, like Robin Wall Kimmerer (Braiding Sweetgrass) and Leanne Betasamosake Simpson (As We Have Always Done). Open to story that has been flowing beside the information superhighway all along.

Ten women descend ‘Desous’ mountain, alert to the networks of reciprocity. I know many of you are mountains ahead of me. Many are walking the path, divesting step by step.

Venta Rutkauskas is an arts organizer, integrative energy healing practitioner, and writer living on unceded Secwepemc territory near T’exelc. To learn more about We Acknowledge and other arts-based reconciliation projects, contact her at williamslakearts@gmail.com.