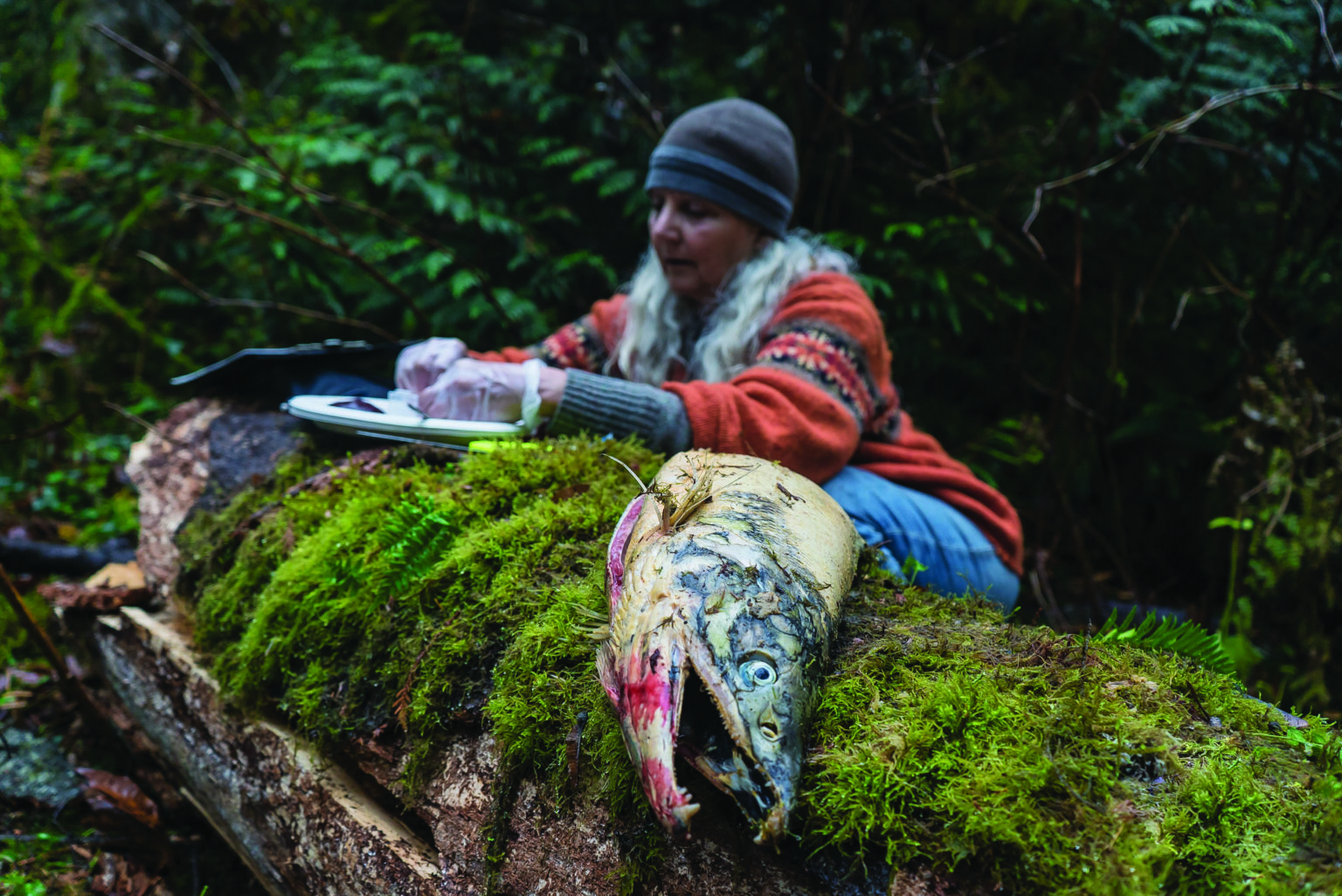 Alexandra Morton has been called “the Jane Goodall of Canada” because of her passionate 30-year fight to save British Columbia’s wild salmon. Her account of that fight is both inspiring and a roadmap of resistance.

“When I went into the wilderness of the BC coast to study whales in 1984, Echo Bay was perfect,” Morton says. “It was a remote archipelago full of salmon and whales, a tiny floathouse community, and three First Nation villages. When the first salmon farm arrived, I thought the industry would bring new families and help keep our one-room school open. I was blissfully unaware that my government decided to give bays where our houses were floating to Scanmar, Stolt, Cermaq, and Grieg to grow millions of Atlantic salmon.”

Morton is a field biologist who became an activist and has done ground-breaking research on the damaging impact of ocean-based salmon farming on the coast of British Columbia. She first studied communications in Bottle-nosed dolphins and then moved on to recording and analyzing the sounds of captive orcas at Marineland of the Pacific in California, where she witnessed the birth, and death, of the first orca conceived in captivity.

In 1984, she moved to the remote BC coast, aiming to study the language and culture of wild orca clans, but soon found herself at the heart of a long fight to protect the wild salmon that are the province’s keystone species.

A few years after the salmon farming industry arrived in Echo Bay, the whales abandoned the area. Atlantic salmon appeared in the rivers, wild salmon died with open sores never seen before, toxic algae blooms began, and then the sea lice epidemics started. Sea lice are a natural parasitic crustacean, but their populations exploded on the captive salmon. Every spring young wild salmon trying to migrate past the salmon farms were eaten to death.

The wild salmon returns around Echo Bay dropped to .1%.

She published science on the impact of these industrial marine feedlots, engaged in endless government forums, led protests with thousands of people, marched 100s of kilometres down Vancouver Island, paddled the lower Fraser River with 100 people for a week, and marched with them through Vancouver to the Cohen Commission into the collapse of the Fraser River Sockeye salmon. She spoke at the companies’ AGMs in Norway and took the industry to court five times and never lost.

“Using the Access to Information Act, I read thousands of internal Department of Fisheries and Oceans documents,” she says. “Canada and the Province of BC were covering up the catastrophic damage caused by the release of viruses, bacteria, and sea lice.”

But that was only the beginning.

“Bears and whales starved and when enough people abandoned Echo Bay, my government burned our school to the ground,” Morton says. “In 2017, I found myself standing on a salmon farm in a winter storm surrounded by RCMP dressed in riot gear. First Nations were pushing back. They had lost their most valuable food resource. Shelves once packed with jars of salmon now lay bare. Mowi, the biggest salmon farming company in the world, hired a group called Black Cube and boats with blacked out windows began following me. We occupied salmon farms for 280 days and things began to change.”

In a series of remarkable events, an ancient government re-emerged and stepped between this disastrous industry-government alliance and their wild salmon.

On December 17, 2020, Fisheries Minister Bernadette Jordan made a landmark decision to honour the demands of seven First Nations on the Fraser River sockeye migration route when she informed the three Norwegian-base companies operating in BC they were not allowed to put anymore Atlantic salmon in 19 farms in that region.

“Desperate to maintain a hold on this coast, the industry is suing Canada and pressuring chiefs, while I am on the water observing the young wild salmon from the Fraser River swimming through fish farm-free channels for the first time in 30 years,” Morton says. “They look beautiful. Sea lice infection on them has dropped 95 percent from last year. Fraser River salmon will finally the chance to make it to sea.

“This fight is not over. But the tide has turned.”

Morton has co-authored more than 20 scientific papers on the impact of salmon farming on migratory salmon, founded the Salmon Coast Research Station, has been featured on 60 Minutes, and has been key to many legal and protest actions against the industry, including the recent First Nations-led occupation of salmon farms on the Broughton.

Making The Dream Of Sustainable Living A Reality

No Time Left to Waste: The Zero Waste Birth