Book Review: Resolve: The Story of the Chelsea Family and a First Nation Community’s Will to Heal 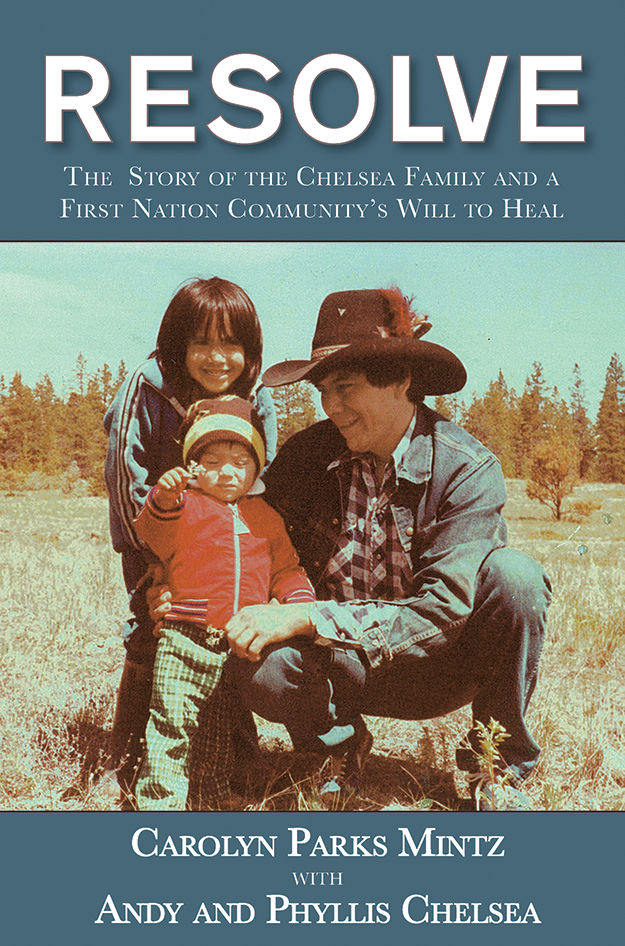 Andy Chelsea was chief of Esk’etemc First Nation at Alkali Lake when I first came to the Cariboo-Chilcotin in the early 1970s. In 1972 he and his wife Phyllis launched a sobriety movement that would eventually transform their community and send reverberations around the world.

But the struggle to turn a community around where every adult was addicted to alcohol was monumental. The nickname for Alkali Lake at that time was Alcohol Lake, and Andy and Phyllis wanted very much to change that image.

As a member of the back-to-the-land movement I was seeking a simpler life when I first met the Chelseas. I told Andy how much I envied his early life growing up in a log cabin, I and confided how much I wanted to live in the bush. He looked at me strangely and surprised me with his response. “I want what you had growing up in the city,” he said. “Amenities like electricity and running water.”

So, there we were: two ships passing in the night, going in opposite directions. But not completely.

Last spring Carolyn Parks Mintz published a book about the Chelseas describing the details of their struggle to carve a better future for themselves and their people. Resolve: The Story of the Chelsea Family and a First Nation Community’s Will to Heal (Caitlin Press 2019), shares insights into Phyllis and Andy’s early life and their remarkable journey to bring sobriety to a community riddled with alcoholism.

She tells of their heart-wrenching childhood being forced away from the nurturing and love of their families to attend Saint Joseph’s Mission residential school at ages seven or eight and the traumatic physical and sexual abuses they suffered there.

Like most children in that predicament they received deep emotional and psychological scars that would take a lifetime to heal.

Phyllis and Andy got to know each other at Saint Joseph’s though there were strict rules keeping the boys and girls apart. They were both shy and recognized a kindred spirit in one another.

After leaving residential school Phyllis and Andy became close and were married in 1964. Phyllis was 21 and Andy was 22.

Alcohol was a big factor in their lives, just as it was with most Esk’etemc people at that time. During the week Andy worked at Linde Brothers Sawmill at Springhouse, and they enjoyed a rich family life with the birth of three children in their first seven years. But on weekends their social life included binge drinking with friends and that’s when things often got ugly.

Parks Mintz attributes the negativity triggered by the alcohol to the undercurrent of trauma suffered at residential school.

“When alcohol was involved, things got rough,” Phyllis says in the book. “A different side of people would come out, and mostly it wasn’t good.”

By 1972 the Chelseas’ three kids, Ivy, Dean, and Robert, usually stayed with one of their grandmothers on weekends while Phyllis and Andy partied.

Then after one raucous weekend, seven-year-old Ivy told her mother she no longer wanted to live with them if they continued to drink.

Phyllis took her daughter’s remonstrations seriously. It caused her to reflect on what she was doing, passing on the hurt and neglect she had inherited from the residential school experience.

That’s when Phyllis saw the urgency to make a change in her life. She promised Ivy if she came home she would quit drinking for good. Phyllis immediately poured all the booze in the house down the kitchen sink and never took another drop again. A week later, Andy followed suit.

That’s how it all began.

It was a lonely existence trying to change a social pattern so deeply engrained in the community, but Andy and Phyllis were determined. At first, they were the only adults in Esk’et to give up drinking. Even the resident Catholic priest was a drunk, a bootlegger and a philanderer.

The Chelseas got support from Oblate Brother Ed Lynch in Williams Lake, who had wrestled with his own alcohol addiction. Gradually, one by one, other members of the Esk’etemc community joined them in their bid for sobriety.

The Alkali Lake/ Esk’et story is one of personal triumph and community empowerment. Many people joined the movement and carried the inspiration and momentum begun by Andy and Phyllis nearly 50 years ago.

Quite naturally there have been ups and downs, but many leaders have stepped forward to keep the dream alive and Esk’et continues to be an exemplary community.

Putting down the bottle was just the first step on the long road to addressing deeper problems like Indigenous rights, reconciliation, and justice for First Peoples in Canadian society.

Resolve is one family’s story on this remarkable journey.

Resolve: The Story of the Chelsea Family and a First Nation Community’s Will to Heal is published by Caitlin Press. It sells for $24.95 and is available in bookstores around the Cariboo-Chilcotin and beyond.