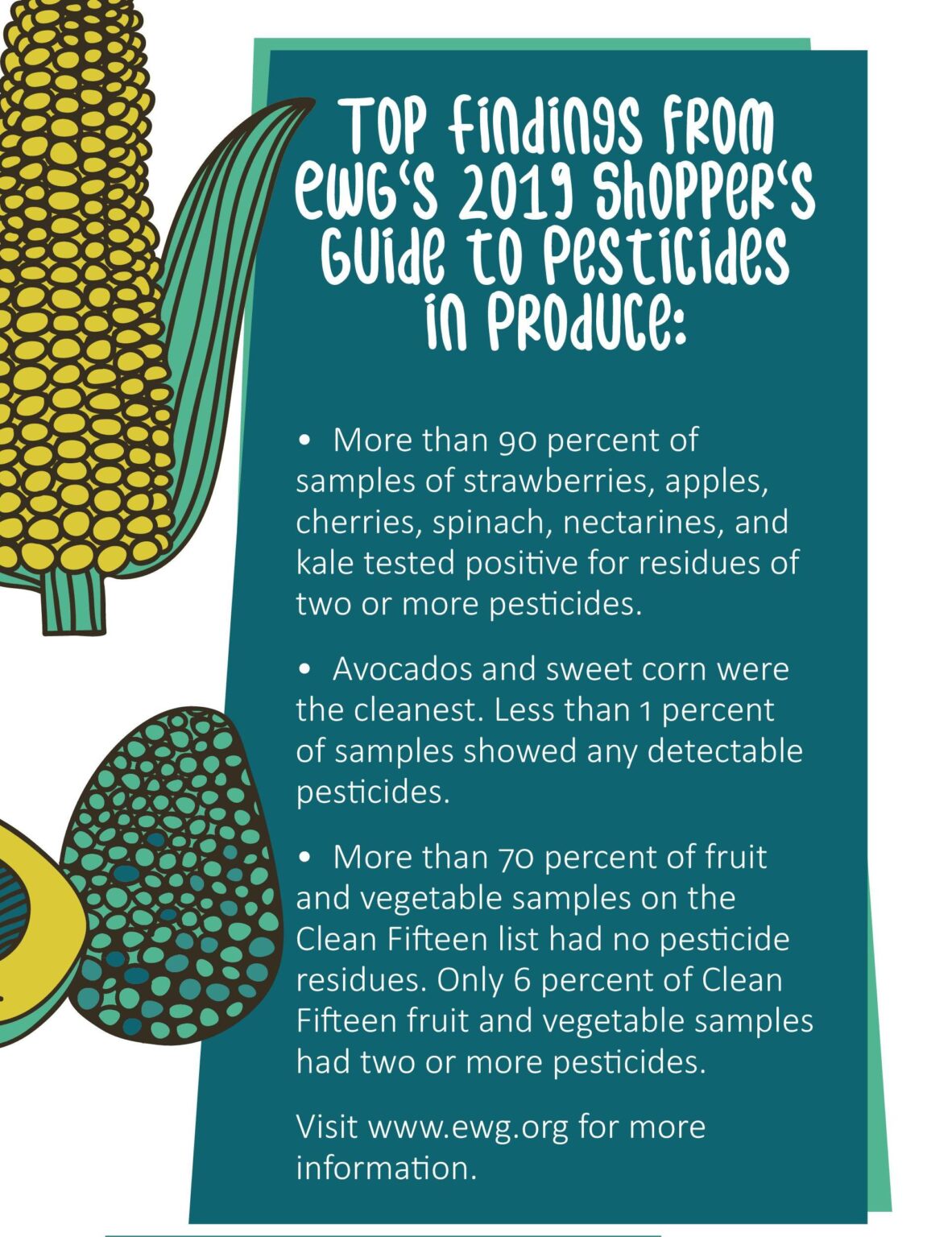 Since 2004, the Environmental Working Group (EWG) has released an annual list of the Dirty Dozen and Clean 15—produce items that contain the highest and lowest concentrations of pesticides. The purpose is to promote the value of shopping organically with a specific focus on balance. “The Dirty Dozen is a list of products we recommend buying organically,” EWG says. “We believe the Clean 15 are the safest foods to buy conventionally. EWG recommends buying organic whenever possible—reducing your exposure to pesticides is a smart move and buying organic sends a message that you support environmentally friendly farming practices that minimize soil erosion, safeguard workers, and protect water quality and wildlife.

“However, we know that organics are not accessible or affordable for everyone, so we created EWG’s Shopper’s Guide to Pesticides in Produce to help consumers make the healthiest choices given their circumstances.”

The lists are assembled based on data from tests conducted by the United States Department of Agriculture (USDA) and the USDA’s Pesticide Testing Program and the Food and Drug Administration. Researchers collect data by washing and / or peeling the produce to replicate the process a consumer would use when preparing the food to eat.

Organic food shoppers generally list avoiding consuming pesticides as their main motivation for doing so. According to a 2013 study published by the National Center for Biotechnology Information, evidence on the relationship between chronic illness and exposure to pesticides is overwhelming.

“There is a huge body of evidence linking exposure to pesticides with elevated rate of chronic diseases such as different types of cancers, diabetes, neurodegenerative disorders like Parkinson, Alzheimer, and amyotrophic lateral sclerosis (ALS), birth defects, and reproductive disorders,” the study says.

A development that turned the Dirty Dozen / Clean 15 phenomenon on its head last year was kale’s appearance in the Dirty Dozen. Coming in third, right after strawberries and spinach, which retained their spots from previous years, kale tested positively for pesticide called Dacthal, aka DCPA, on 60 percent of the samples and 92 percent carried at least two different pesticide residues. Dacthal has been listed by the Environmental Protection Agency (EPA) as a potential human carcinogen for more than 20 years, and its use has been illegal in Europe for a decade.

“We were surprised kale had so many pesticides on it, but the test results were unequivocal,” said EWG Toxicologist Alexis Temkin, Ph.D, in a press release from EWG. “Fruits and vegetables are an important part of everyone’s diet, and when it comes to some conventionally grown produce items, such as kale, choosing organic may be a better option.”

However, the EWG quotes nutritionist Jaclyn London in her article for Good Housekeeping: “There is evidence suggesting that eating kale can reduce one’s risk of chronic disease, lower blood pressure, and improve bone health—so it’s up to you to decide if the benefits outweigh the risks.”

Overall, nearly 70 percent of the conventionally grown produce sold in the United States comes with pesticide residues, according to EWG’s analysis, reported in a press release from the organization.

“The main route of pesticide exposure for most Americans who do not live or work on or near farms is through their diet,” said EWG Research Analyst Carla Burns. “Studies have shown that eating fruits and vegetables free of pesticides benefits health, and this is especially important for pregnant womenand children.”

The American Academy of Pediatricians Council on Environmental Health emphasizes that children’s exposure to pesticides should be as limited as possible. Pesticide exposure during pregnancy and early childhood increases the risk of brain tumors, leukemia, neurodevelopmental defects, and other adverse birth outcomes.

“The health benefits of a diet rich in fruits and vegetables outweigh the risks of pesticide exposure,” Burns said.

In Canada, pesticide use is regulated by Health Canada, and the Canadian Food Inspection Agency monitors residue limits in both domestic and imported food.

The best choice is to support local food initiatives and to buy directly from a local farmer or shop at a Farmers’ Market, there you can meet the hardworking people who grow your food and find out about their growing methods. Another great option is to experience the satisfaction and health benefits of growing your own produce from natural, organic, or heirloom seeds every season. -GG

Jessica Kirby is a freelance editor and writer covering the environment, lifestyles, and the built environment for publications across Canada and the United States. She can usually be found among piles of paper in her home office or in the Vancouver Island wilderness enjoying nature’s incredible bounty.