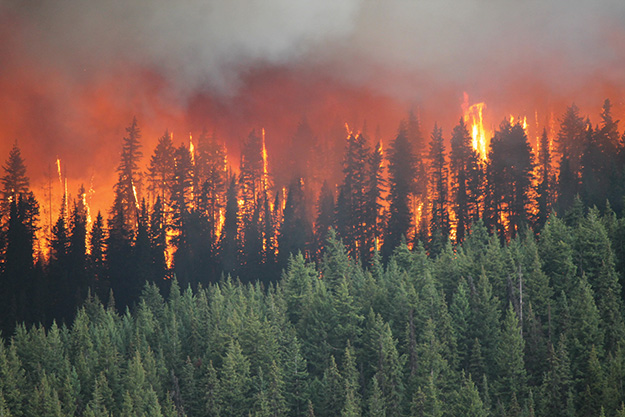 There is no doubt we are immersed in a climate crisis, as already we are experiencing the impacts—floods, fires, storms, and rising temperatures. Due to the still rising CO2 levels and the activated feedback loops, including the release of methane, recent predictions are suggesting that there could be 5 to 6 degree C rise in temperature by the end of this century. The big questions for us now are, what could we expect to happen where we live, what can we do to protect ourselves, and what can we do to make a difference?

The province’s central interior forests have already been devastated by wildfires and pine beetles. Although there was a reprieve this year, the situation is likely to become grim again. Thus, fire remains the biggest threat and it is not a question of if, but when we will see another large fire threaten local communities.

There is another warm blob in the Pacific, which may be another reason why this year’s salmon return is so dismal. When climate change is combined with overfishing and fish farming, the demise of the BC’s iconic salmon could come sooner than anticipated.

It is not only the glaciers in Greenland and elsewhere that are melting at increasing rates; so are BC’s glaciers. As they melt there will likely be much lower water levels in the fall and less water for communities.

Another major threat is from flooding and landslides, due to the increased likelihood of intense storms and precipitation combined with the damage caused by logging, fires, and roadbuilding. We have already witnessed such disasters, including this year on the Chilcotin River and Big Creek.

Perhaps the greatest threats due to climate change are those not yet considered. Germs locked in the melting ice could cause a global epidemic or excessive heat and drought could devastate essential crops leading to malnutrition, disease, and starvation. Insects that carry diseases are already moving northward.

Another impact will likely be mass migration. When the oceans flood the coastlines and the heat becomes unbearable to the south of us, people will move north in droves. BC could end up with millions living here, and one result could be mayhem. Food production will become critical, as it will become difficult to grow food in more southern climates.

The most important activity will be adaptation, as humans will need to find new ways to live on a planet that will be much warmer than it is now. Fireproofing will be key, as will water management. Eventually humans may have to live underground and use solar panels for lighting underground greenhouses. It is difficult to imagine how humans will be able to cope with a planet that is 5 degrees C or more warmer than now.

Some years ago, I switched my focus from environmental advocacy to bioregionalism, resulting in the publication of the first book about our region, Everything Shuswap. Bioregionalism, which is a lifestyle dedicated to one’s home place, is one way we can protect ourselves as the planet warms. The more we know about our home place, and the more we cooperate as a community, the better our communities will be able to cope with emergencies.

My generation has failed humanity. Instead of following the ideals developed in the big era of change during the 1960s and 70s, never-ending greed has led to almost endless wars, no end of pollution, the decimation of species and forests, despot leaders in countries around the world, and now the biggest threat to humanity—climate change. Sadly, it is now up to young people to make a difference, and thanks to leadership from one young Swedish student, Greta Thunberg, changes may indeed be forthcoming.

Unfortunately, the obstacles to change are enormous, given the influence of the wealthy few who continue to profit from carbon pollution. Overconsumption is indeed at the root of the problems and until we see a rejection of the lifestyle that is threatening life on the planet, not much will change.

As long as the planes keep flying and people carry on with their meetings (including climate change conferences!) and vacations, as long as the container ships keep bringing more plastic goods from Asia, as long as we continue to fuel our lifestyles with coal, oil, and gas, as long as forests continue to be cut and burned, and as long as the majority of farmland is utilized for meat and dairy, global temperatures will continue to increase. At best, we need to prepare for an uncertain future.