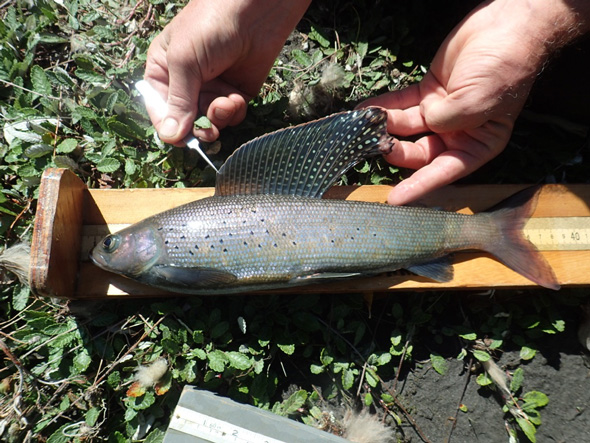 In his book, Freshwater Fishes of British Columbia, Don McPhail elegantly describes how glaciation events have influenced the diversity and distribution of our freshwater fishes. Upwards of 20 glaciations are thought to have occurred during the two and half million years of the Pleistocene, each separated by a warm interglacial period, similar to our current climate. At the end of each glaciation, fish entered BC in the wake of retreating glaciers. When glaciers advanced again, fish retreated to at least five different glacial refugia (isolated glacier-free areas). Most of the province was repeatedly swept clean when the glaciers advanced, but survival for tens of thousands of years in isolated refugia promoted diversification of fish species. Lineages associated with these glacial refugia represent the deepest, most ancestral components of diversity below the species level for freshwater fish.

Freshwater fish have diversified more recently as well, forming genetically divergent forms post glacially, or within the last 10,000 years. Species generally appear to have responded to the unpredictable climatic fluctuations by spreading their genetic diversity across many locations. Having populations locally adapted to different chemical, physical, and biotic environments increases the probability of species survival.

Sockeye salmon and their freshwater derivative Kokanee (Oncorhynchus nerka) provide a wonderful illustration of this recent component of genetic diversity. Genetic studies have found Kokanee evolved in parallel; each formed independently in different lakes from their Sockeye salmon ancestors. All Kokanee are phenotypic expressions of the full-time freshwater form of O. nerka, yet genetically there are more similarities with adjacent Sockeye salmon populations than among different Kokanee populations.

Other species such as Bull trout (Salvelinus confluentus) and Dolly Varden (S. malma) show less obvious phenotypic differences. To the untrained eye the two species are almost indistinguishable and when they interbreed in the laboratory produce viable young. Authors Zoe Redenbach and Eric Taylor showed in Evolution, however, that hybrids tend not to survive in the wild, probably because each has very different ecologies. John Hagen, who studied interactions between these species for his Master’s thesis, says Dolly Varden are better insectivores and out compete the Bull trout in small headwater streams. The Bull trout are pushed downstream into larger habitat where they grow large, forage on fish, and migrate long distances to carry out their life history.

The Bull trout is probably endemic to North America and is blue-listed (species of special concern) in BC due to their vulnerability to human developments (see: www.env.gov.bc.ca/atrisk). Consequently, the province of BC is working to identify populations that are key to their long-term survival and monitor their abundance over the long term. Currently, two lineages (interior and coastal) have been identified in BC and studies are needed to better understand traits that characterize their differences. Coastal Bull trout have closer connections with the ocean environment in the south coast and the interior lineage is adapted to interior watersheds.

These species accounts present contrasting examples of the ways our freshwater fish have diversified in BC: relatively rapid (postglacial) evolution in O. nerka results in obvious physical and behavioural differences; deeper more ancestral genetic differences between species and lineages of Salvelinus result in less apparent differences that require extensive scientific study to discover. Currently, the province recognizes 81 freshwater fish species and subspecies and each has diversified in unique ways to ensure future survival.

Provincial managers recognize that most of the diversity in native freshwater fish remains unknown and have initiated a number of studies to better define our fish species and influence adaptive management. They have initiated a mandate to conserve healthy ecosystems (and thus native fish populations) and provide healthy environments for future generations (see: www.env.gov.bc.ca/wld/fishhabitats/conserv_protect.html). However, human developments are accelerating and far outpace this growing catalogue of biodiversity in the province.

Consequently, decisions to allow for resource extraction and energy developments should be precautionary and take serious account of and avoid potential impacts on undiscovered diversity. Otherwise what might be perceived as a simple decline in abundance as a result of a development might turn out to be extirpation of unique and irreplaceable components of a species gene pool. Currently, aspects of biodiversity require years of study and rigorous scientific support before they trigger influence on industrial developments.

Mike Stamford is an independent fish biologist with a special interest in conservation of BC native fishes.