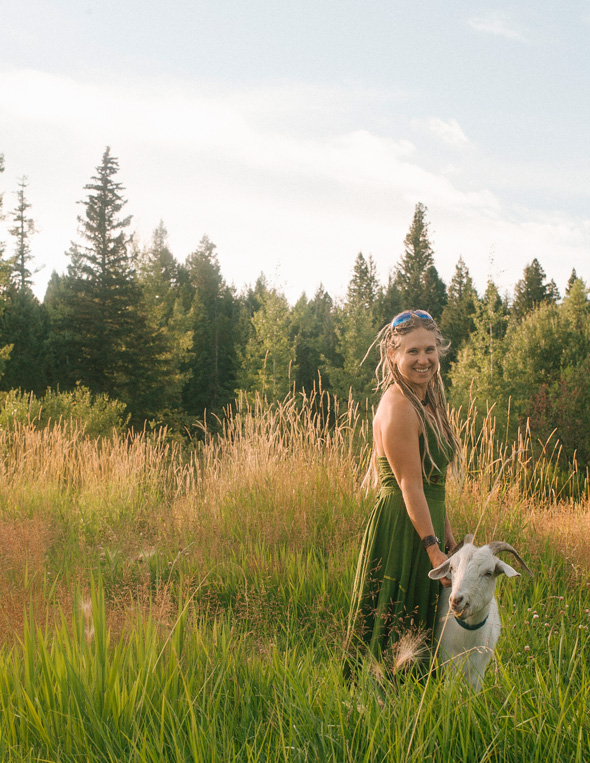 Every time I go to market at least five people ask, “Where’s Amadeus?” It makes me laugh. This silly little goat has no idea what an icon he’s become. He loves his public appearances because he gets lots of petting and even more sunflower seeds. He also really does enjoy riding in the truck. But he also loves his goat life. He is still a bit of a pariah among his own kind. While the rest of the herd do tolerate his presence, he is still not, nor will he ever be, one of them.

Sometimes I feel bad for my odd kid. The others will head-butt him if he gets too close or just if they’re feeling ornery.         He doesn’t really seem to mind; life with the herd has always been like this for him.

But sometimes he stands up to them. The other night we watched from the balcony as three of the goats ran to the goat shed to get out of the rain only to find that Amadeus was already inside. Usually when this happens he gets head-butted repeatedly until he finds his way to the door. But this time, somehow, the three goats entered the shed and moments later stampeded out the door again. We wondered why they had vacated the premises so suddenly when Amadeus proudly stuck his head out the door then gave a happy little hop, skip, and jump and ran towards our house. He had kicked the others out of the shed all by himself! It was the act of a real goat. Not that I condone goat violence, but I was proud of my kid for standing up to those bullies!

Sometimes Amadeus even leads the herd. Okay, well, not exactly. But it seems like he is their leader sometimes. It goes like this: Amadeus falls asleep near the herd as they all bask in the sun. Moments later the herd, probably having waited for him to fall asleep, all get up and head out to the meadow. Hours later, Amadeus wakes and realizes he is alone. Goats hate to be alone. He heads out to the meadow to see where they’ve gone. By this time, they have eaten enough and are all heading back to the house. When he sees them he turns around and runs ahead of them and now he is leading the herd! It never ceases to please him. And it always makes us laugh.

Terri Smith is an organic vegetable farmer in the Cariboo with Road’s End Vegetable Company. She has a Bachelor’s degree in Literature and a diploma in Art.

Guardian of the Vegetables: Gardening Through the Pandemic

Good Green News (for a Change!) – Renewal and Rejuvenation