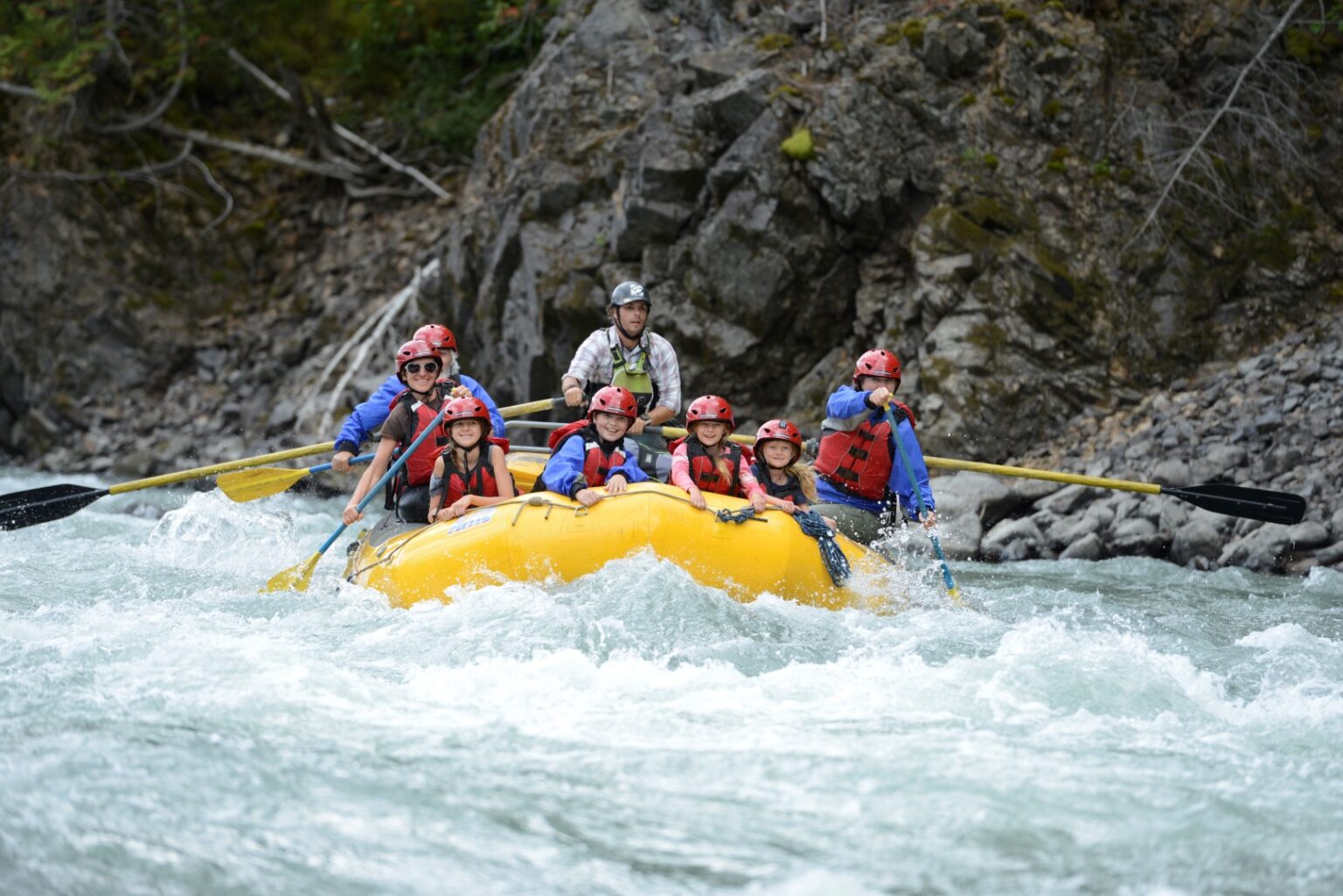 Protecting and preserving the environment is a top priority for wilderness-based businesses, and Big Canyon Rafting in Quesnel and Fraser River Raft Expeditions in Yale are no exceptions. But for both of the owners, that priority is also intensely personal.

“Our business was affected when the Mt. Polley Mine breach happened,” said Julie Dinsdale from Big Canyon Rafting, who owns the company with her husband, Tyler. “It was the beginning of our peak season and there was a lot of uncertainty.”

“We feel very strongly about this. We’re supportive of the Tsihlqot’in National Government (TNG) in the Prosperity Mine issue. It would have impact all the way down the line: all the waterways and rivers. We contributed to their court battle and expect to continue to do so,” she added.

“This area is a place we enjoy as a family, and this is very real to them and to all of us.”

She added that rafting is more than the thrill and excitement of hitting big white water sections. “You get a real feel of the pace of a river,” she said. “You can explore mountains and sand dunes—see it all from the river’s perspective. It’s complete wilderness; you sometimes see First Nations dip netting and you see lots of wildlife. You go back in time a bit.”

It’s important to never leave a footprint behind, she said. “We collect all waste and garbage, haul self-contained toilets with us, and comb the camps really well when we leave: go the extra mile and leave no trace.”

On extended trips they separate out all recyclables and organics. They buy as much local food as possible and reuse all dishes and utensils. “Rafters are happy to see that we take these steps,” said Dinsdale. “They’re very supportive.”

They have guests from across BC, places across Canada, Europe, the Netherlands, the US, Australia, New Zealand, and Israel.

“What I want people to take away with them when they raft with us is a passion for rivers, for aquatic life, for wildlife,” said Dinsdale. “I want them to know how important fish are to eagles and bears; I wanted them to have a magical glimpse and want to do this again.”

Sue and Darwin Baerg, owners of Fraser River Raft Expeditions, funnel their passion for preserving rivers and the wilderness around them into research and education as well as multi-day trips.

Fraser River Raft Expeditions focuses on environmental education and ecological studies that really make a difference. One of the company’s longest-standing guides, Shane Turnbull, said, “We’ve been around. The trips we do have more value than just a white-water-thrills type of outfit, though we do plenty of that as well. We’ve been voted into the Fraser River Hall of Fame, which says something,” he explains.

“We don’t just offer one-day tourist trips but customized trips and those for specialized interest groups that need to be on the river for different reasons,” said Sue Baerg. There is still a lot to learn about the mighty Fraser River. Some of the Fraser River Rafting expeditions have been with a team of scientists and fluvial geomorphologists from multiple universities looking at how gravel moves in the Fraser. During the Gold Rush in the late 1800s, huge amounts of gravel were deposited in many locations in the upper reaches of the Fraser River from placer mining. Scientists are conducting an in-depth study trying to determine how the gravel load moves through the river, how much the river carries, and if the gravel load already in Chilliwack is actually from the gold rush. “The scientists spend a lot of time looking at computer screens rather than looking at the scenery,” said Baerg.

She explains that Fraser River Rafting Expeditions also participates in collaborative trips with other rafting companies.

“It’s a small industry and we all have to work together to maintain its integrity.”

“We just did a collaborative nine-day trip for a rancher from the 100 Mile area who gifted his 93-year-old mother with a trip. She always wanted to travel the river, and he made it happen for her.”

Fraser River Rafting Expeditions also takes a lead role in an annual Rivershed Society of BC three-week education program, which focuses on salmon, stewardship, and sustainability. They take participants by raft, canoe, and on foot 1,200 miles down the Fraser River. Baerg said it’s always nice to be on the river travelling and camping, becoming a little community floating down the river.

In addition to offering one- to nine-day trips, on the Fraser and other local rivers, Fraser River Rafting Expeditions also collaborates on the FraserFest program with the Rivershed Society of BC and offers two days of rafting from Lytton to Boston Bar, and Boston Bar to Yale (through the Hells Gate) in early September.

“We’re bringing First Nations Elders from nine bands out onto the river from Spuzzum to Spences Bridge as part of FraserFest,” said Baerg. “Some of the elders haven’t been down the river for a long time, and remember many of the areas. They requested more whitewater trips through Hells Gate as well.

“What we do is simple: we get people on the river so they understand the river better, look at it differently, and get a passion for it,” she continued. “On the river it’s a different world.” Geshe Sherab Returns for his Fifth Visit to the Cariboo