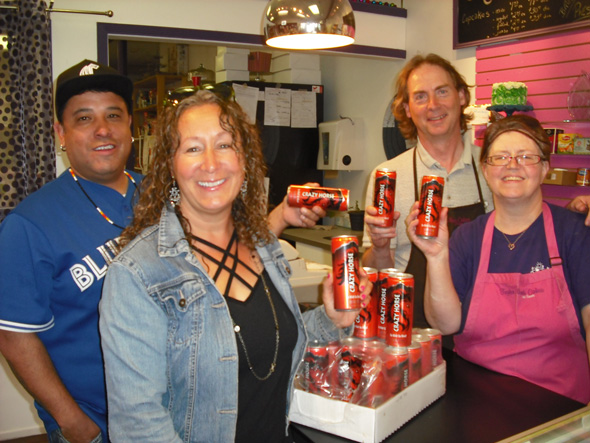 Tall red cans in gasbars and retail outlets across the Cariboo-Chilcotin Coast and throughout the BC Interior promise you a refreshing, energetic pick-me-up on a hot day. Crazy Horse energy drink, emblazoned with the words “Go Wild! Go West!” and the image of a horse with a backdrop of mountains, resonates strongly with the Chilcotin.

They have had success selling their product locally. Now they want to expend their market into the broader spectrum.

Crazy Horse energy drink was the brainchild and inspiration of Becky Bravi, a biologist and forest ecologist in Williams Lake. One area she specializes in is innovative forest practices including the development of non-timber forest products. The idea of the energy drink was inspired by her research on non-timber products found in the forests of the Cariboo-Chilcotin that could be developed into small to medium sized business ventures.

Bravi came up with a couple of options and proposed the idea of an energy drink to Tsi Deldel First Nation. The community was interested, and took the idea to their elders to find out what berries and ingredients they felt could be derived from their backyard for agro-forestry. They identified rosehips and Saskatoon berries.

“In the Chilcotin, rosehips are ubiquitous to the region,” Bravi says. “Wild prickly rose is something all of our community forests could develop as an industry. It’s easy to grow, it’s super sustainable, it’s an understory crop, and it is one of the first species to come up in clearcuts.”

Bravi figured rosehips were an ideal product that people could harvest on a sustainable level. They just needed an economic incentive.

“Build it and they will come,” she says. “Members of the Tsilhqot’in community could become entrepreneurial suppliers of the products needed for the drink.”

Charleyboy is now the point person in charge of distributing and marketing the energy drink.

“We developed a recipe through the Guelph Food Technology Centre,” Charleyboy says. “We came up with a formula that includes rosehips and Saskatoon berry flavouring. Other ingredients include ginseng extract, citric acid, and vitamins B2, B5, B6, and B12.”

Charleyboy says what sets Crazy Horse Energy Drink apart from its competitors is its lower caffeine content and natural ingredients.

“There’s a lot of vitamin C and we have less processed cane sugar instead of regular glucose fructose,” he says.

With Crazy Horse energy drink, the long-term goal is to get as many ingredients as possible from the Chilcotin forests, either by cultivating them or harvesting what grows naturally.”

He adds a lot of non-energy drinkers will try it and not feel the jitters they would normally get from drinking other highly caffeinated beverages.

At the same time, he says, kids are buying it.

It’s not discouraged in a lot of stores,” he says. “Moderation is the key. You don’t drink it like pop or anything.”

To put it in perspective, Crazy Horse beverage has 103 mg of caffeine, compared to 38 mg in a can of Pepsi. A large Starbucks coffee has 400 mg per serving.

The sugar content is about the same, with a can of Crazy Horse containing 39 grams compared to 41 grams in a can of Pepsi.

To get started they purchased the rosehip concentrate and natural Saskatoon berry flavour base where they could find it.

“There are not a lot of producers of Saskatoon extract in western Canada,” says Charleyboy. “The price went up, so we have to keep an eye on that. People are starting to realize it’s a super-berry. I think that’s where our kick really comes from.”

With Crazy Horse energy drink, the long-term goal is to get as many ingredients as possible from the Chilcotin forests, either by cultivating them or harvesting what grows naturally.

Charleyboy says the inspiration for the beverage’s brand name comes from the wild horses the Chilcotin is famous for.

“With the Crazy Horse idea, we were looking for an image of the wild west, and wild grown products,” he says. “That’s the concept behind the energy drink and its name.”

He says the theme resonates well in the rodeo and pow wow circles, and with anyone interested in wild products.

“In the BC Interior the Crazy Horse drink already has quite a following but we want to expand the market base,” says Charleyboy. He explains the corporate structure behind the Crazy Horse product line.

“We have a corporation called Tsi Deldel Development Corporation. They kind of own the recipe and the drink and manage it with a board of directors. We’re in the midst of getting Becky Bravi back on board, and we’re going to be pushing for marketing to the bigger venues.”

This summer SaveOn Foods supermarket in Williams Lake started carrying the product. Charleyboy says their next move is to get Crazy Horse into Costco and London Drugs.

“Right now we are kind of growing our market locally, and getting quite a following here,” he says.

Charleyboy adds they still have quite a bit of product to move, despite starting with a small manufacturer in Portland, Oregon. He says there weren’t a lot of options to produce the product in Western Canada.

“In order to do a small run we had to go south of the border,” he says. “Doing it in Western Canada would have required us to do a huge run, which we weren’t prepared to do. Hopefully our next one will be in Canada.”

With the exchange rate, a Canadian manufacturer might be more attractive.

“We need to move it by the pallet load, not the case load,” Charleyboy says. “Then we can move into a bigger market.”

“We have full management of the beverage. It’s ours. The can’s attractive, the idea is cool.”

Sage Birchwater moved to the Cariboo-Chilcotin in 1973. He spends his time freelancing, authoring books, and with Caterina, hanging out with their dog and cat, gardening, and being part of the rich cultural life that is the Cariboo Chilcotin Coast.

Book Review: Changing Tides – An Ecologist’s Journey to Make Peace with the Anthropocene