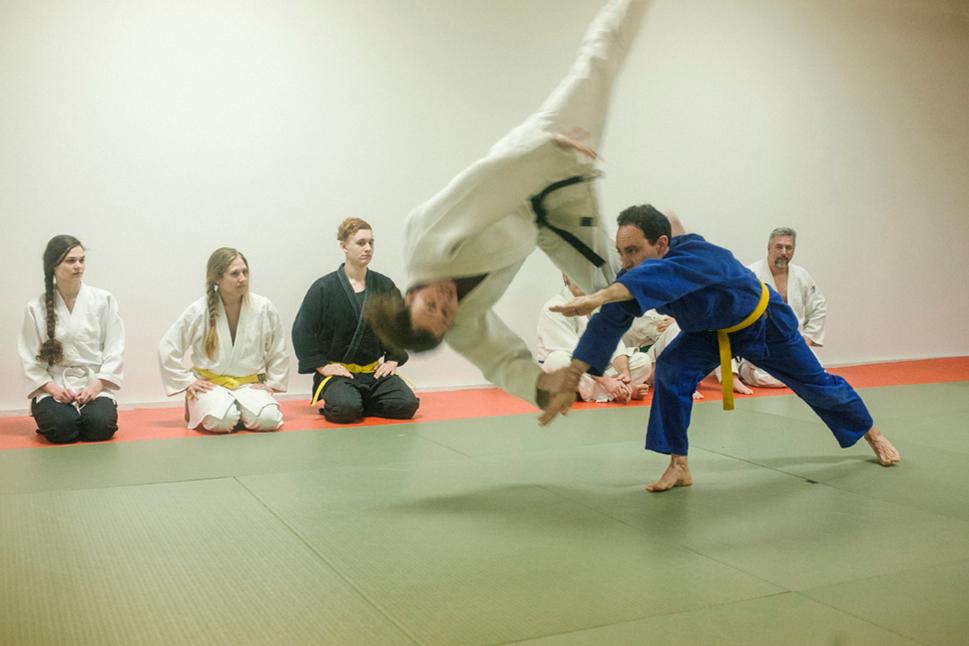 Many people who call Williams Lake home have been concerned lately with what seems to be an alarming increase of violence in our town. People who were once comfortable walking alone here now find themselves nervous at times, even in the daylight. As I walk along Mackenzie Avenue at dusk on a Tuesday night I reflect that I used to be nervous walking alone here, too, but Aikido has changed that for me.

Walking into the Dojo (training hall), several people greet me with, “Osu.”Pronounced, “Oh-sss,” this is a Japanese word that simultaneously means, “hello,” “goodbye,” “yes,” and “thank you.” I watch the students talking with Sensei Curtis Seeger, watch his easy, relaxed manner with them, how they all want to talk with him, how intently they listen when he speaks, and I see this is truly his calling.

With over 20 year of teaching experience, Sensei Curtis will be officially opening his new school, Aizenkan (eye-zen-kahn) Martial Arts in April. The timing seems perfect. As he says, “One of the qualities that comes out of training in Aikido is the ability to stand before anger and aggression without becoming involved in it. This almost always leads to a de-escalation of the situation since an Aikido student by his or her very nature is no longer ‘prey’ to be hunted and predators do not engage with someone who can stand firmly before them.”

Aikido is a non-competitive martial art and so, unlike other practices, Aikido is not about winning or losing but rather is about improving yourself and your own self-confidence. In Curtis’s words, “It’s about learning to control yourself first rather than learning to have power over another.”

Sensei Curtis said many parents have appreciated the non-competitive aspect of Aikido for their children. Aikido is fun for kids, teaches them to look other kids or adults in the eye, and teaches them how to maintain their personal space. With kids’ classes being offered for children as young as four years old, Aikido also increases co-ordination and a child’s ability to focus.

As for being green, other than a cotton training uniform and some wooden training weapons, Aikido does not require consumption of anything. It is an activity with a very tiny carbon footprint. When asked about how Aikido fits into a green philosophy, Sensei Curtis responds, “When people are happier and better-adjusted, they become more aware of the world around them. Aikido doesn’t seem to necessarily have a lot to do with living a greener lifestyle, but it can help people to feel empowered and to be more aware of the world they live in, which in turn can lead to positive changes in other areas.”

Sensei Curtis began Aikido training when he was 14 years old in Ontario. When he finished high school he was asked to apply to take the Yoshinkan Aikido Instructors course in Japan. Until that year, this course had only been open to the Tokyo riot police and no foreigners had ever received a black belt or teaching license through this program.

After completing the course over the next several years, he taught in Windsor, London, and Kincardine, Ontario before moving to BC where he first opened a school in Surrey. As many of you probably understand, Sensei Curtis soon fell in love with the Cariboo region and moved to Williams Lake two years later where he taught for several more years and then decided to take a break from teaching. During that time, a severe arm fracture caused by a mountain biking accident caused him to put teaching on hold for much longer than he had intended. In the meantime he did youth work with the Boys and Girls Club for six years and he will soon be volunteering with them again, teaching mindfulness and self-awareness, some of the core values of Aikido.

Now, several years later, he has decided to take his dream to the next level. With the help of Community Futures’ self-employment EI program, Sensei Curtis has created an awesome business plan and will be officially starting up his school in April. This is more than just a business venture for him; it is something he feels can help make the world a better place. He will be offering classes on four days each week for every demographic from children to adults with an elders’ class for those who want to receive the benefits of Aikido, such as improved balance and flexibility, without doing the pins or throws. Aizenkan Martial Arts shares a space with the Williams Lake Judo club at 360 Mackenzie Ave and Curtis would particularly like to say thank you to Jeff DeMarco and the WL Judo club for the help and support that has helped this vision to become a reality.

As I leave the Dojo and re-enter the dark night, I am grateful for the confidence this training has instilled in me. This town is lucky to have Sensei Curtis. For more information you can call him at (250) 305-4849 or email him at aizenkan1@gmail.com.

Terri Smith is a non-certified organic vegetable farmer in the Cariboo.  She is passionate about writing, art, goats, and feeding good food to good people. She believes in following your heart, living your dreams and taking care of the planet.