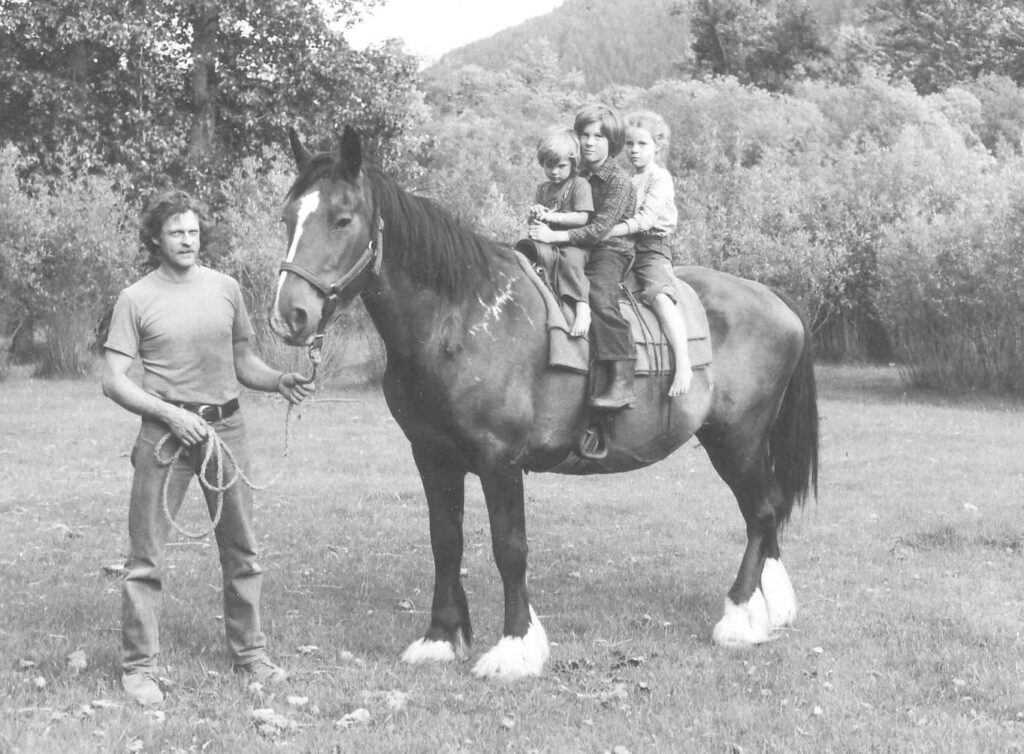 Wayne Padgett is an author and passionate believer in the herbal healing found in nature and in the vital importance of protecting the environment. In 1986, Padgett and his wife Sie started Northern Naturals Health Products Ltd.

They create salves and ointments to treat a huge range of ailments and conditions: some for horses, some for people, and some for both.

Their newest line is a salve made from non-narcotic hemp oil. “We like this oil because it has amino acids that our bodies can use but can’t make,” said Padgett. “Wheat germ oil is the highest in vitamin E and this hemp oil is second. It’s also anti-bacterial.”

Northern Naturals hit a high point in the early 1970s when the salve caught the attention of Tommy Craig, head trainer for the Toronto Blue Jays. “I got the notion to send him a sample of the product we made at the time: a plain salve with 10 herbs,” said Padgett.

“Three years later he called me and said ‘I like your product. I want you to make me a hot salve. I’m from Texas and I like it hot.’” We used the hottest cayenne pepper you can get.

“It was great to meet him. He’d give me free tickets to exhibition games in Vancouver, and I got to meet the whole team,” said Padgett.“It was a real highlight in my life.”

Padgett comes from a family background in First Nations natural healing. “When I was 10 years old I almost died of asthma and had to sleep sitting up, using a ventilator,” he said.

“My grandfather, who was half Cherokee, said ‘I’m going to show you how to get rid of your asthma.’ He took me out to get sassafras roots and we made tea. I drank that tea for three years and became one of the best runners on our school team.”

He said traditionally in the southern US and even places in Canada, only the boys would be trained in herbal medicine. “I got trained in it and was one of the only ones who took it seriously,” he noted.

He took it even further after he got out of university, where he received a degree in history. He ended up teaching school in Vancouver for a year, where he met his wife, Sie.

He found that city life wasn’t for him, and knew he wanted out. “I wanted to go back to family roots and study herbal medicine; my wife said ‘I’m with you. Let’s go.’”

The two set off across Canada to Nova Scotia in 1970 to buy cheap land. Along the way, they sold copies of his first book everywhere they possibly could, to make gas money.

They came to Wawa, Ontario, which he describes as an old mining town gone bust, with a huge goose statue on the side of the road. “We were just about out of money,” he said. “We were just a couple of long-haired hippies and found our way into a Legion bar. Everybody was speaking French, and we thought we wouldn’t sell a single book.”

He laid his books out on the table, and when the other patrons discovered it was a book of poetry, they started buying. “We sold piles of books there,” he said. “We made more money in that Legion than we had the whole trip.”

In the end they decided to return to BC. “We travelled a bit, looked around, and saw Bella Coola on a map,” he continued. “I remember stopping at the top of the Bella Coola hill, looking down into the valley and saying, ‘This is paradise.’”

Padgett got a job as a builder with long-time resident, followed by work building a campground, and caretaking at Tweedsmuir Provincial Park.

One look at the Atnarko area, however, and he fell in love and knew that’s where he truly wanted to be. “I really wanted to horse farm,” he explained.“I had done it with my dad and grandfather.

“We got hold of the owner of a log house along the Atnarko River at the base of the mountain and arranged to rent it. We stayed there 15 years. We were hippie farmers and we loved it. We had immaculate hayfields, horses, and gardens. Our kids were born there.”

Eventually, the family settled on seven acres in the Bella Coola Valley, and turned it into an herb farm.

“We started making salve for our horses and for us—the Double Heart brand equine salve still sold at Beaver Valley Feeds in Williams Lake,” he said.

They continued to make salves and ointments and the business grew. Sie studied herbs and how they work together and designed the ointments.

Padgett said they went to Australia with their products in 1999, where it only took a month to get them registered and start selling, as opposed to that process taking a year and a half here. “We sold our horse salve to a guy who supplied it to ranchers in Northwest Australia. They loved it, and used it on humans and horses alike,” said Padgett. “They felt that if it was good enough for the horses, it was good enough for them.”

Another good seller is the Natraway Sports Jels. The Sports Jel #1 and #2 is sold at Sta-Well in Williams Lake, as is Mulleinade.

“I go into the mountains and pick the green buds from the Mullein plants,” said Padgett, adding that the product’s herbal application is in cosmetic form.

“It’s great for the skin, hair, and lungs, and for treating colds. It’s good for treating insect bites, burns, and scrapes, and is traditionally known for treating acne and skin problems,” he added.

Passionate about protecting the environment and avoiding noxious poisonous herbicide sprays, Padgett has gone to bat for the environment more than a few times: it’s a way of life for him.

“Herbs grow wild in our yard; we go in the wilderness and pick them pure,” he explains. “We can’t poison the Earth—there’s only so much left.”

This matters to Padgett on a very personal level. He has seen first-hand what herbs will do and feels very fortunate that he had the opportunity to learn about them.

“Residential schools went a long way toward wiping out their whole culture,” he said. “The older people couldn’t practice herbal medicine anymore. I think that’s why it’s important now to get this back with the young people. When I was young I thought my Cherokee grandfather was crazy until he healed me of asthma.”

He said it’s so important to do what we can to preserve this knowledge. “I have dedicated my life to learning about herbal healing and offering it to others, as well as protecting the environment,” he said.

He feels connected to the Earth and dedicated to the art of healing. Compassionate, visionary, and practical, he describes himself as highly imperfect. “I’ve made mistakes in my life,” he said, “and I’m trying to make it right.”

He added that some of the plants they use in their healing salves and ointments are made from plants that people call noxious and spray them with noxious poisons.

“They have the power to heal you: they’re sacred and we have to protect them or we’ll lose them. And if we do that, we’re done,” he said.

“When our Earth was created our medicines were created. They’re a gift from the Creator.”