Heads in the Sand, Pies in the Sky – Governments deny the facts of life 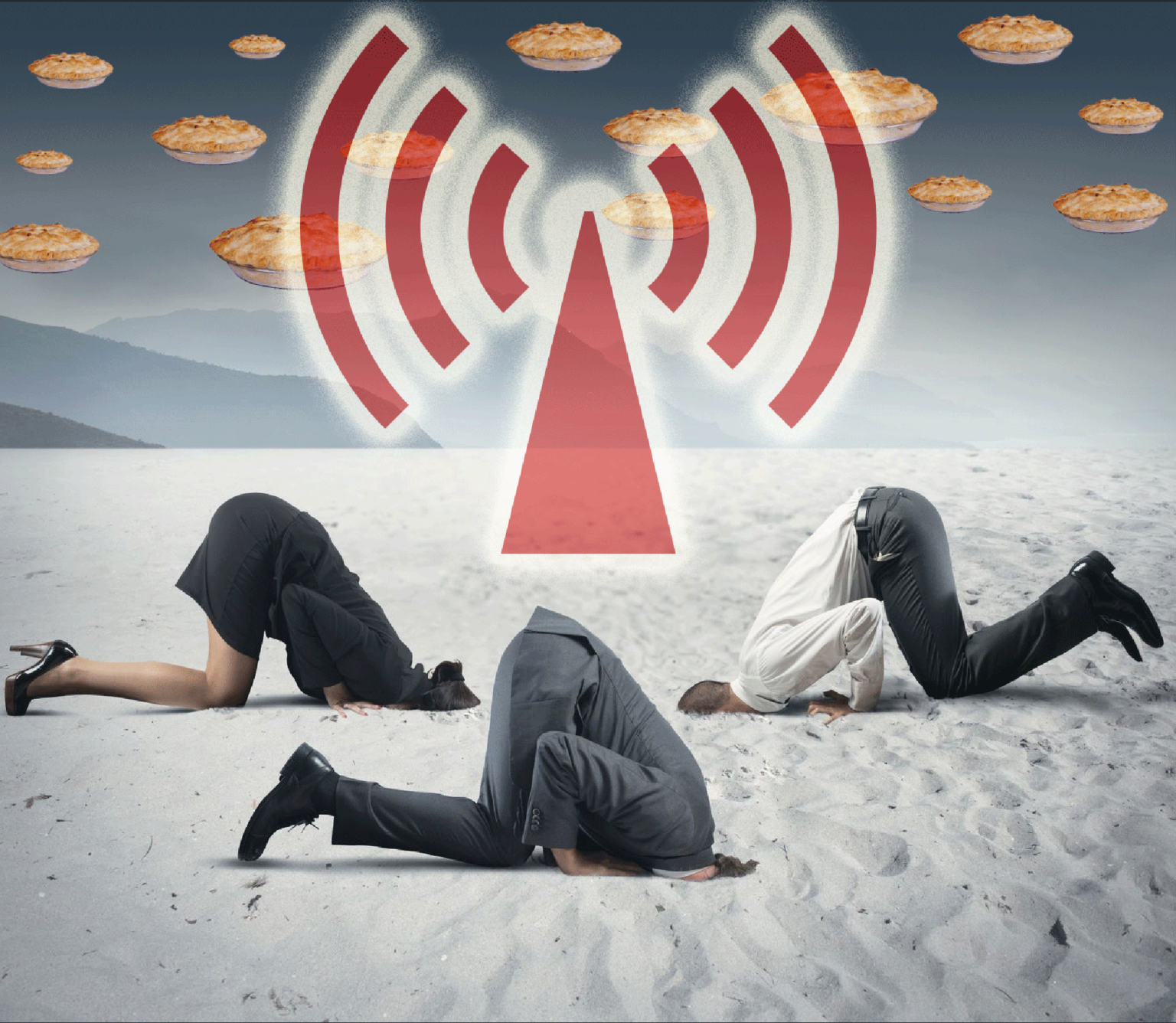 When wisely applied and when based on empirical research, science helps keep us safe. Science makes sense of things and helps us understand how things work. It stops us from sticking our fingers in electrical sockets or from thinking we can fly if we jump off a high building, in defiance of the law of gravity. It provides us with a solid, reliable, fact-based foundation and a better awareness of the laws of physics and nature that govern our existence. And it enables us to make informed choices that are healthy and sustainable for people and the planet, while protecting physical infrastructures, the economy, and our essential humanity. We disregard it at our peril.

Yet many governments, including Canada’s, have rejected the solid scientific evidence of the harm caused by humanmade electromagnetic fields (EMFs). Despite the 25,000+independent, peer-reviewed studies by scientists, doctors, epidemiologists, biologists, and researchers who have published their findings in scientific and medical journals, government healthcare agencies are categorically denying, diminishing, or distorting the facts regarding the proven dangers of radiofrequency/microwave radiation in our environment.

This radiation has reached intolerable levels for millions of individuals worldwide, causing an epidemic of illness that has yet to be officially acknowledged. Depression, neurological disorders, autism, ADD, anxiety, insomnia, brain tumours, heart conditions, seizures, and infertility are just some of the numerous conditions that result. Uncontainable, unquantifiable, and cumulative, the radiation is coming at us from multiple sources—WiFi, cellphones, cell towers, cordless phones, electricity smart meters, and other wireless devices that rely on microwave radiation to transmit their signals far and wide. Known since the 1920s to be harmful to all forms of life, microwave radiation has been used as a military weapon since the 1950s. Yet now it’s being used by the wireless telecommunications industry as if it were benign and perfectly safe.

Industry. That’s the giveaway word. Worth trillions of dollars, the wireless industry pays millions of dollars in licensing fees to governments every year. It’s an undeniable equation: industry + money = influence + corruption. Here’s another one that’s likely to come back to haunt the government very soon: government denial + increasing harm to the public = massive lawsuits. Remember asbestos, lead, DDT, and thalidomide, not to mention cigarettes? If you start out telling lies, it’s very difficult – and enormously costly – to then backtrack and admit the truth.

We should not have to fight for protection from our own government, which is supposed to keep us safe.

Countless studies of the biological effects of microwave and other forms of electromagnetic radiation (EMR) show our cells are adversely affected by even minute amounts of this non-ionizing, non-thermal radiation. Millions of people worldwide are now experiencing physical/neurological symptoms due to EMR, which should be evidence enough on its own. Many of these individuals have been ill for years, suffering misdiagnoses and financial loss before finally realizing that EMR was the cause of their condition.

No one wants to be electro-sensitive. Even though electromagnetic hypersensitivity (EHS) is now a recognized disability in many developed countries, many of those with EHS/microwave sickness are marginalized, ridiculed, and dismissed as cranks. They’re excluded from normal activities and services—not because there’s something wrong with them but because the environment has become too toxic for them to handle.

Both our government’s denial of the facts and the wireless telecom industry’s enormously profitable existence rely entirely on your continued ignorance of the scientific facts about electromagnetic radiation. But you don’t need to be a scientist to understand what’s going on. Just think about the nature of radiation itself. It acts like light, radiating outwards in all directions. It travels at the speed of light, instantly penetrating walls, concrete, buildings, vehicles, plastic, wood, bone, tissue, and every cell of your body. And it doesn’t just pass through you. It affects your organs, muscles, nerves, brain, blood, and, therefore, every biological function of your body. Bear in mind, too, that when radiation is flying through the air in this way, invisibly extending for unknown distances and simultaneously overlapping with multiple other sources of radiation, you cannot possibly measure, monitor, control, or contain it. You might as well try to trap light with your fingers. How, then, can government safety guidelines protect us? The answer is: they can’t.

Of course, being so reliant on all our wonderful wireless gadgets makes us reluctant to confirm the facts. What happens if they get taken away? How will we cope? My iPad/cellphone is my life! For those who do not remember the olden days (just a few years ago), we actually used to hard-wire our computers and use corded phones, obtaining all the benefits without the harmful radiation. Admittedly, that means having to walk a bit further to answer the phone or having to leave your laptop in your office rather than having it with you at mealtimes, in the garden, and in the bathroom. Once the dangers are acknowledged, however, innovators always step in to fill the new niche.

Cafés, libraries, healthcare centres, and other public places could provide internet sockets for hard-wiring laptops, thereby retaining their customers and their health. As for cellphones, there are ways to diminish their impact and usage so we can enjoy the technology without the brain tumours. Emerging technologies may prove to be just as effective as WiFi, without the deadly downsides. Whereas technology always evolves to meet the demand, whatever our agenda, science has evolved as a result of our quest for knowledge and safety. If we disregard it, we simply won’t survive. But if we respect it and apply it to the technologies we create, we can have our cake and eat it.

No need for pies in the sky… and no need for millions to wi-fry.

Olga Sheean is an author, educator, relationship therapist, and empowerment trainer specializing in human dynamics and holistic healthy living. She also helps empower those affected by EMFs, offering practical information, guidance, and support. See www.olgasheean.com.
See: https://www.emf-portal.org/en, a database of over 25,000 peer-reviewed scientific publications on the effects of EMFs.