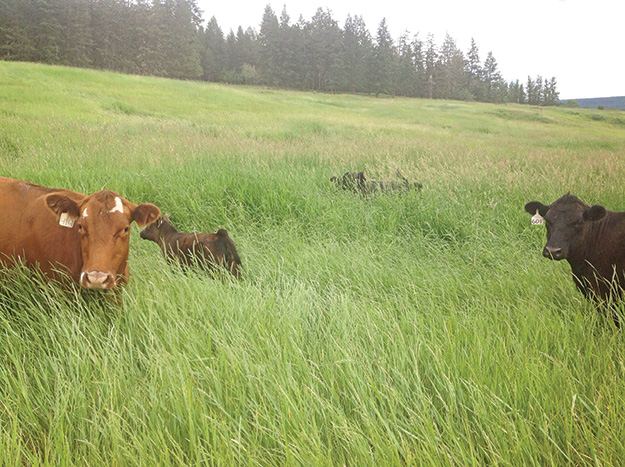 A few days ago, on CBC radio, I listened to an interview with a very intelligent man who eats vegan for breakfast and lunch and vegetarian for dinner. He misses meat all the time, he says, but knows that animal agriculture is one of the biggest polluters of our planet.

I agree with him, and yet I’m still going to tell you that you should eat meat. If you want to. But with a very crucial caveat: eat good, local meat.

Industrial agriculture is absolutely killing this planet. But that goes for crops like soy and corn and any other conventionally produced, monoculture crop every bit as much as factory-farmed animals. Cows are not the world’s great evil; CAFOs (Concentrated Animal Feeding Operations) are. We should not be eating any animal products from animals raised like this. CAFOs are inhumane and toxic.

If we want to make informed decisions about our diets, however, we should take care to research our choices well. Becoming vegan to save the planet is not necessarily helpful. In fact, if done badly it can be a terrible choice. Soy is one of the big three genetically modified crops and whatever you may think about GMOs themselves, the fact is, they are sprayed like crazy and fertilized like crazy and you know that with all that glyphosate and fertilizer the soil under the crops is pretty much dead and the groundwater under it is contaminated. Not to mention the amount of fuel that goes into this sort of large-scale production or the amount of fuel that goes into shipping.

We need to stop looking at vegetable production as good and meat production as bad. Instead, we should differentiate between industrial agriculture and small-scale, mixed farming. All large-scale agriculture is hurting the planet whether the end product is steak or tofu.

If you want to help the planet, support small-scale, local agriculture. Small, mixed farms could save the world. And yes, that definitely includes farms that also raise animals for meat.

Cattle who are managed well and who live on grass are actually helping with carbon-sequestration. In places like Brazil it is a tragedy that the rainforest is being cut and burned to make way for cattle. This is a terrible idea. But in places like the Cariboo, much of the land that grazes cattle is natural grassland or mixed forest, and it cannot be used for any other sort of food production anyway. Rather than being destructive to the natural environment, cattle can actually improve ecosystems.

Cattle and grass evolved together. They are part of a shared ecosystem, and both have a part to play. In an ideal grazing arrangement, here is what happens:

Grass takes in carbon dioxide from the air and releases oxygen. The carbon is what “builds” the plant. A cow walks up to this plant and takes a bite. Her hooves are perfectly designed to break open the exterior of the soil, leaving little pockets where rain can collect so that next time the rain comes it doesn’t just run off the surface of this grassland. The plant itself maintains a balance between what is above and what is below the level of the soil. The bite that this cow took causes the equivalent root mass to die, sequestering the carbon it is made of in the soil and providing organic matter that will increase the humus content. The plant is also stimulated to send out new growth to recover the loss from the bite. The cow moves on over the grassland. She may urinate or defecate, adding even more nutrients to the soil. Insects and worms will move into her manure. Birds follow the cow and scratch apart her manure to get at the seeds or insect life within it, which in turn aids in its decomposition and decreases the chances of there being any parasites for the cow to eat when she comes back this way again. Any water the cow has taken in that isn’t contained as part of her body is put back in the form of urine and manure. The grass, soil, and fungi filter and clean this water while using the nutrients pulled from it. It is a beautiful, symbiotic relationship. This is what nature does. Nature likes balance.

Good farmers try to work with nature to help natural processes create great food while simultaneously building soil and a healthy, whole-farm ecosystem that is filled with biodiversity.

So, if you’re feeling holier than thy carnivorous neighbour, put down your avocado toast and banana smoothie for a moment and consider that their bacon and eggs may have come from a healthy ecosystem a few kilometers away while your breakfast may have been shipped from halfway across the world where it was grown in very unsustainable ways.

Share. Facebook Twitter Pinterest LinkedIn Tumblr WhatsApp Email
Previous ArticleMessage from the Universe: Do it Now, with Urgency
Next Article Book Review: Resolve: The Story of the Chelsea Family and a First Nation Community’s Will to Heal