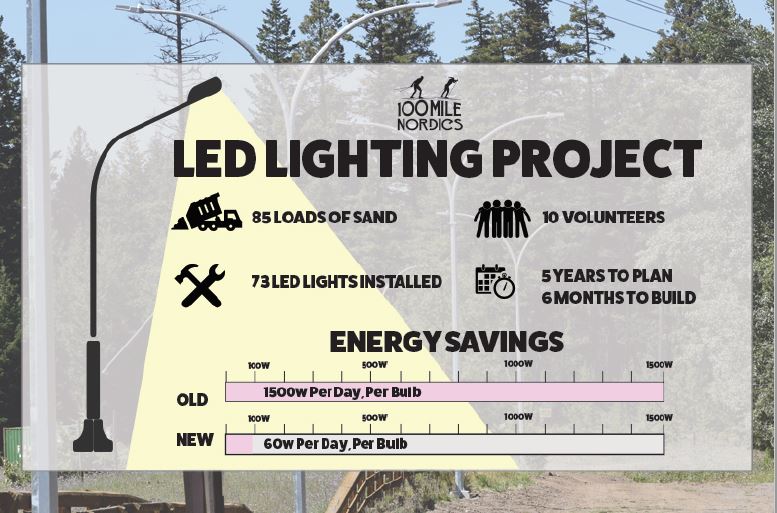 The club operates at the 99 Mile ski trails and has been in operation for over 35 years.

The “Nordics” have over 200 members and operate a 45-km network of track-set Nordic ski trails and a charming log cabin lodge. The club is one of the most active and vibrant non-profit sports clubs in 100 Mile House.

Club Media Liaison Craig Davidiuk says the club has seen renewed interest in cross-country skiing the past couple of years. He attributes the increase to an influx of new people moving to the region from larger centres.

In 2019, the club won a province-wide membership contest through Cross Country BC and enjoyed the largest gain of any club in the province.

“Families, singles, and seniors in the South Cariboo are trying Nordic skiing and loving it,” Davidiuk says. “The lighting upgrade is reflective of the need to keep up with other recreation offerings in the region and appeal to more people who want to go skiing after work in the winter.”

The lighting system itself is operated on a timer until 10 p.m. nightly. Skiers simply suit up, hit a button, and enjoy 5km of lit trails until 10 p.m.

The old lighting system has been in operation for over 22 years and followed more challenging trails than this new version. The old wooden light poles were up-cycled and new metal poles were added in different locations with underground wiring instead of overhead wires. Special attention has been paid to the style and direction of the lights to reduce light pollution.

The biggest change will be that the lighting system focuses more on the stadium oval right outside the Nordic lodge. This means parents will be able to view kids from the lodge while eating a snack by the fire. It also allows novice skiers a place to take lessons and spend time learning on the flat, easy trails.

“Nordic skiing is as green as it gets,” Davidiuk says. “Used skis and gear can be found at our annual ski swap on November 3 where you can up-cycle and purchase used skis. The technology hasn’t changed much so most used skis you buy are literally as good as new.”

The project has been in the works since 2016. In 2018, the club was granted $388,375 through the province’s Rural Dividend Fund and $40,000 from the Cariboo Regional District’s Community Works Fund.

“We gratefully acknowledge the financial support of the Province of British Columbia,” Davidiuk says. “There is an opening ceremony for the lighting system planned for December and the general public is invited to attend.”