A Walk in the Woods – Lost and Found on Quadra Island 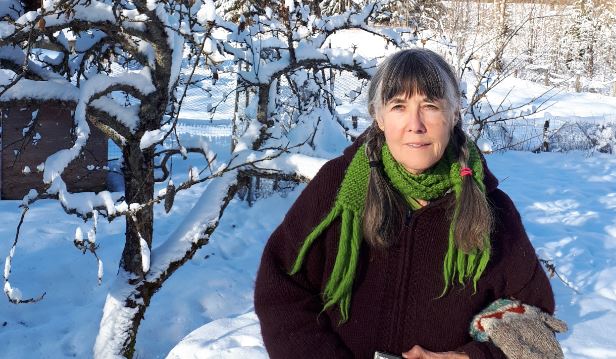 It was an easy mistake, something any one of us could have done. But whether any one of us would have survived unscathed is a different question entirely.

It was mid-November 2018 when Roberta Robson (75) and Karen Talbot (69) left a home on the north end of Quadra Island to take the dog for a short trail hike to “Skinny Dip Lake” as it is called by the locals. Roberta, a fit and avid hiker, was leading the way, and she was confident she knew the directions to and from the lake.

“I’d been on the trail before, but in summer and earlier in the day,” she says. “This time it was quite overgrown and looked different, and it had always been tricky.”

The pair made it to the lake, and everything was great—until it wasn’t. “We just took a wrong turn coming out,” says Roberta. “It could have happened to anyone.”

And it’s true—anyone who spends as much time in the wilderness as Roberta is bound to feel confident in their abilities, and at home in the lush, rainforest wilderness of BC’s west coast. But for how long? Roberta and Karen discovered their comfort level dropped off about two days later, when they still hadn’t found their way back.

Paul Berry with Comox Search and Rescue told Chek News the duo had set out around 3:15 p.m. on what was meant to be an hour-long walk.

When they didn’t return, a search was called the following morning, with rescue volunteers amounting to about 90 people by day three.

“It’s amazing,” says Michael Mascall, a friend of the missing women, in an interview with Chek News. “We had searchers here from Victoria, the Cowichan Valley, from Parksville, Campbell River, Port Alberni, and even the west coast. Their help was amazing, and they just went over the area thoroughly.”

Roberta and Karen spent the first night on a mossy bluff, not sleeping but following sound wilderness practices by staying put since they had no light by which to make their way safely.

“We cuddled for warmth, and we had no food,” says Roberta. “When it got light, we started walking.”

Despite their best efforts, the pair couldn’t get their bearings. They followed a fast-flowing creek thinking it may lead to the ocean, but it just took them deeper inland and into a ravine near the bigger lakes on the island. The terrain was rough, threatening injury, and although the first day and night were dry, by morning on day two it was pouring rain.

“I had a pretty good rain coat, a wool sweater, and a wool hat but no rain pants,” says Roberta.“I was soaking wet from the waist down and water sloshed around in my shoes. Karen had a leaky rain jacket and rain pants.”

Looking for shelter, they came across a beautiful stand of cedar trees that arced over the land like umbrellas. Roberta was in awe.

“I’d never seen huge cedar trees like this before,” she said. “The next night we spent under one of those amazing trees.”

The forest may have been beautiful, but it was cold—the pair spent the night huddled together, teeth chattering attempting to visualize fire and warmth to get them through the night. Suddenly, through the darkness, helicopters appeared, their noise and lights breaking through the trees. Then they disappeared.

“I told Karen they were looking for us,” says Roberta. “The helicopters came back in the morning, but they couldn’t see us waving from the deep forest. We would have been more visible from the bluffs, but we would have frozen to death out there.”

On the third day, the sun shone, its warm rays piercing the forest canopy and warming the two women, who were grateful for the heat, not sure they could bear a third night. By the afternoon the helicopters had not reappeared, and Roberta was once again getting worried. Suddenly, she heard a whistle and knew the ground crews were close.

“I started yelling for help,” says Roberta. “I saw the big grin on Karen’s face. We made our way over to where the voices were coming from and found locals Heather and Ben, who shared warm clothes, tea, and food.”

The ground crew had climbed a high and narrow ridge from the big lakes and followed that ridge down to the low lands to find the lost women. They’d signalled Search and Rescue, which long-lined Roberta and Karen out of the woods and to BC Ambulance for assessment.

“There were two hunky young men with us under the helicopter,” laughs Roberta. “When the helicopter landed, the two young men landed on their feet. Karen and I fell over backward. I looked over towards the community centre and there were all my friends and Karen’s family.”

Mascall said once they discovered where the women had been found, friends and neighbours weren’t surprised. “We walked into the lake where they did their walk and we could see how you could get disoriented, particularly late in the day when there’s not much light,” he says. “You can just lose the path and take the wrong one, and it’s not much at the time but it leads out to a totally different place.”

Roberta’s fitness level, wilderness experience, and ability to stay bright in a dire situation all contributed to the women surviving the event unharmed. Because she’d planned to be out just an hour the pair hadn’t brought any supplies—a habit Roberta says she will be correcting. “I used to always bring supplies, but I hike all the time and am so comfortable, I just didn’t this time. It won’t happen again,” she says. “We were nobody special, but Search and Rescue and the community spared no resources to find us. I’m grateful for that. I don’t know how we would have survived the third night.”

In retrospect, she says the forest and its bounty were quite beautiful and she would like to go back­—better prepared, of course—to process the experience and reclaim her comfort in the wild.

Heading out for a backcountry adventure? Inclement weather, injury, and simple human error can change the course of any excursion, no matter how experienced of comfortable you are. Specific items used to fulfill navigation and clothing requirement will vary depending on the climate, location, and type of trip, but never forget they are called “essentials” for a reason—never leave home for the backcountry without them.

4. First aid: including foot care and insect repellent (as needed)

5. Knife: plus a gear repair kit

7. Shelter: carried at all times (can be a light emergency bivy)

8. Extra food: Beyond the minimum expectation

9. Extra water: Beyond the minimum expectation

10. Extra clothes: Beyond the minimum expectation

Also, make sure you are prepared physically for the task at hand. Hiking is for everyone, but like any sport there are inherent risks. Work your way up to longer hikes, and make sure you are familiar with the type of terrain you’ll be encountering. Being prepared can be a game-changer in the wilderness.