Music: Nightwish – A Vehicle of Spirit 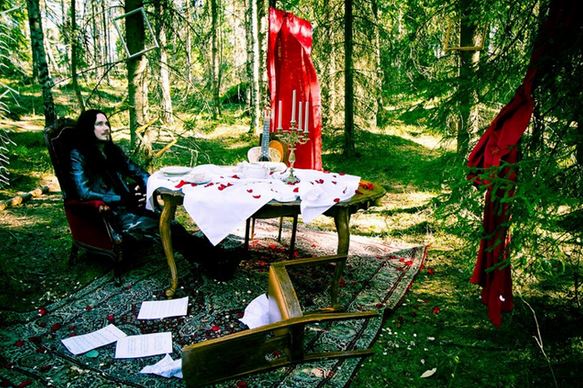 “Those who find beauty in all of nature will find themselves at one with the secrets of life itself” ~ L. Wolfe Gilbert

Since I was a young child, I had a deep sense of connection and an inherent fascination with the manifestations of the natural world. The experience of external wilderness has gradually evolved into experiencing an internal wilderness of body, mind, and spirit.

One of my deepest inspirations is the music and emotional journey of listening to the music of Nightwish, the most successful symphonic metal band from Finland. The music transports me far beyond the material to the ethereal.

In July 1996, around a campfire on an island in the middle of Lake Pyhäjärvi, Kitee, Tuomas Holopainen had an idea of a solo project that would play atmospheric “mood music.” Since the band formed over 20 years ago in the sleepy town of Kitee, it has become a success on the world stage, spawning a worldwide commercial behemoth. The band combines classical music with power metal, strong vocals full of emotion, and beautiful poetic lyrics.

Nightwish is the brainchild of Tuomas Holopainen, the founder, composer, and keyboardist for the band. He has composed all the music and lyrics since the beginning. The music is an embodiment of his life and art and he has profound views on the power of music, its purpose, its source, and all that shapes our lives. The music comes from the love and devotion of the exploration of life and love on earth.

In April 2018, my sister, Jenn, and I had the pleasure of attending Nightwish’s “Decades: World Tour” in Vancouver, BC at the Queen Elizabeth Theatre. I also arranged an interview with Holopainen. I was euphoric to meet with him in person. He was humble, real, down to earth, and good-natured. Our time was brief, but I was so focused on his words that everything in the room disappeared. We could have been in a forest by a lake. Meeting with him reminded me of the vibrancy that connects us all.

“Many people don’t realize this, but this is not a dream come true,” Holopainen shared. “I never wanted to be a musician. I never dreamed of the kind of life I have at the moment. I wanted to be a biologist. I studied at Kupio for a year, and then music took over and I kind of realized that it was my forte and it’s what I wanted to do—to give meaning to myself and to the world through music. I had the realization that I could actually influence the world in a positive way.”

We talked about his childhood, his connection to nature, and what kind of an impact it has had on writing and lyric development. We also discussed the storytelling that plays a part in his creative process.

“Our environment and where we grow up really modify what we become, what we like, and what we are, and I have lived in the same little rural city of Kitee all my life,” Holopainen said. “It is very deep in my blood, this place. The first house we lived in was in the middle of nowhere, in the woods, with a lake about half a mile away. I really got into nature and was not the most social guy in my school. Yet, I was also not lonely. I enjoyed solitude and long walks in the woods. I was part of the Boy Scouts, a nature club, and a bird watching club. Nature and the natural sciences had a big influence on me, and because I was brought up in this environment, nature had a big impact on the art I do, as well.”

“If I was brought up in Helsinki or Vancouver or New York I would possibly not think and feel the same way about the world,” Holopainen said. “If I had been a city boy I may not have had such a connection to nature. I would maybe see the world differently and have done something different. I have nothing but good memories of my childhood, and I’m still inspired to this day. Maybe I got lucky.”

Holopainen’s connection to and understanding about nature inspired the deep concepts around evolution and our global biological inheritance on their latest album, Endless Forms Most Beautiful. The album features song titles such as “Shudder Before the Beautiful,” “My Walden,” and “The Greatest Show on Earth”. The lyrics tie in with some of Charles Darwin’s and Richard Dawkins’ theories and have sparked people’s interest in tangible ways. “After writing ‘The Greatest Show on Earth’,” Holopainen said, “on the tour, we autographed countless Origin of Species and Richard Dawkins books. The music has sparked something in people and they are asking, ‘What is life and evolution? What is nature?’”

In the song, “The Greatest Show on Earth,” Richard Dawkins is heard speaking a widely quoted passage by Charles Darwin, in On the Origin of Species: “There is a grandeur in this view of life, with its several powers having been originally breathed into a few forms or into one; and that, whilst this planet has gone cycling on according to the fixed law of gravity, from so simple a beginning endless forms most beautiful and most wonderful have been, and are being, evolved.”

I asked Holopainen how he feels about all the touring and being in big cities and huge crowds, and whether he is still able to feel connected to nature and recharge.

“I like that things change,” Holopainen said. “I love that things go in cycles. If I were a hermit in my house in the middle of the woods 24 /7, all year round, I wouldn’t see people. I wouldn’t have the experience of big cities and concerts, which I also enjoy. So, in a sense I have the perfect job. I can be home for a year writing new songs and then go on tour, which is a whole different circus. I am absorbed in the experience and meeting new people, playing live, interacting with the audience, and constant socializing. It is very draining but also gives me a lot, and I know that in about 2-1/2 weeks I get to go back home to a horse, two cats, and my wife, so I like that things change.”

I asked what advice he would give to the readers and young artists that want to follow their dreams.

“It is really important to follow your dreams but even more important to try to do actual things to realize them,” Holopainen said. “Many people stay in the dreaming and wishing state, and they don’t try to do something. Every New Year’s Eve, my wife and I create an actual physical treasure map of the things that we want to achieve. Maybe it’s during the year or within the next five years. Every year we say,’ Okay, we conquered that island!’ Things such as when we finally got the horse we wanted so much or produced the Nightwish movie. And there’s still some bigger dreams yet to be conquered. So, the map is on our wall to remind us of our ultimate bucket list and when we’re lying on our death bed, there won’t be a single thing left on that map.”

“We try to give listeners a sensation of awe and beauty through our music, because not only do we need to preserve this planet, but we also need to remember the reasons why. We have to remind people of the beauty and that we need to take action.”

“The music of this awe,
deep silence between the notes,
deafens me with endless love.
This vagrant island Earth,
A pilgrim shining bright.
We are shuddering,
before the beautiful,
before the plentiful.
We, the voyagers.”
“Shudder Before the Beautiful” ~ Nightwish
From Endless Forms Most Beautiful (2015)

To learn more about the band and its music, visit www.nightwish.com.

Rebecca Patenaude is a long-time resident of the Cariboo and makes her home in Horsefly, BC. She has a passion for nature, music and philosophy, as well as science and technology. Rebecca is the owner of EVIR Design, a freelance web and desktop publishing company.