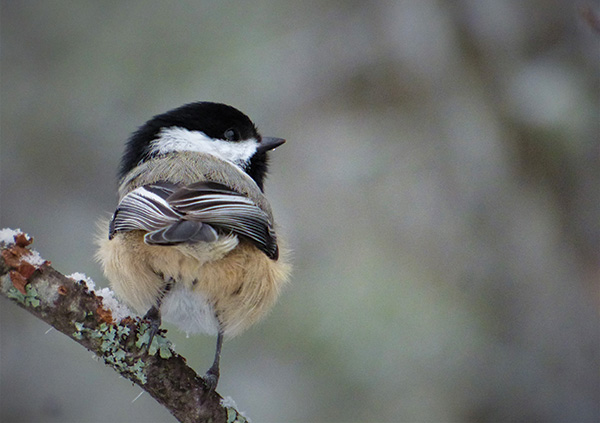 Grant Hill from Pause to Feather Creations promotes wildlife awareness and conservation with passion, creativity, and a heartfelt belief that you should never, ever take the presence of wildlife for granted.

Three years ago, he left the corporate world of industrial cleaning supplies. There was a big conflict between that and what he believed, and he knew something had to change.

“I always had a love for nature, and about the time I knew a change was coming, I started making a few bird feeders,” he explains. “The first one was born from a lack of good bird feeders out there, and after I made it my wife said, ‘That’s nice. You should sell some.’”

The name Pause to Feathers is a play on words from a couple of sources, he explains. “Getting out in nature is good for the soul,” Hill says. “It relaxes people and reduces your heart rate. It’s good to pause in your daily routine and take in nature around you. I often hike without worrying about how far I’m going, and it’s not uncommon for me to take three hours to travel two kilometres. It’s all about learning to pause.”

The other meaning is ‘paws’, as in animals, and ‘feathers’ refers to the bird-related nature of Hill’s products.

He says he has found a lot of like-minded people and organizations out there helping wildlife, and that it’s important to him to recognize and support them. He does this through donations, consulting, fundraising, and raising awareness.

Hill supports PawPrint Ridge Pet Services and Rescue a local service that assists with feral cats and abused pets, as well as the organization, Stop the Spray B.C., (www.stopthespraybc.com) saying spraying logging cut blocks with glyphosate is the biggest holocaust we have going on right now.

Also on his list is Pacific Wild’s campaign, The Call, (www.pacificwild.org/make-a-difference/join-the-call/) an organization working to stop the wolf cull in B.C. He explains that the group is well funded and does a fantastic job with legal and science based education and information from wolf biologists, and ecologists around the world. “The wolf cull is downright cruel, snaring and hunting from helicopters,” he says.

“I also support Project Bouchie Lake Bluebird by making relatively inexpensive bluebird boxes,” Hill says. “I sell them for $10 and half of the money goes to the Baker Creek Enhancement Society in Quesnel, with a focus on nature awareness and wildlife enhancement.”

Hill donates his exquisite wildlife photography to Quesnel Hospice’s fundraising auctions. “Fundraising for them really matters to me because their volunteers are amazing and also because I will be there one day,” he says.

Various community groups have benefitted from his knowledge and passion through his Power Point presentations on topics such as bats, held in partnership with the Community Bat Program of B.C.

“I also do a presentation on the decline of bird populations and bird feeding, and a ‘feel good’ nature presentation,” he says.

Building bat, bee, and bluebird boxes is another way Hill helps protect a range of species from declining populations. Bat populations, for example, are in worldwide decline.

“Bats have a slow reproductive rate and about 50 percent die off in the first year,” he says.“Their habitat is being destroyed, and the White Nose Syndrome (fungus) is now moving across North America, wiping them out.”

Hill has sold 235 bat houses so far, and says the smaller house size helps spread the bats out, hopefully reducing the spread of the fungus.

He brings a passion for wild animals and artistry together in his beautiful wildlife photography, skillfully framed in barn wood. He also does custom framing for people bringing the customer’s photo or picture to life.

“The pictures that people bring to me for framing are of extremely high sentimental value and it means the world that they entrust them to me,” he explains.

In all the jobs Hill has had in his life, he says there has never been a customer satisfaction element. Until now.

“It’s satisfying and encouraging to talk to people with similar interests, and it’s amazing to see changing perception in people who’ve never thought about bats or bees in a positive way,” he says.

“When people walk away from my booth, or from my presentations with new awareness and inspiration, the feeling is unbelievable. I never dreamed this would ever happen.”
For more information on his products, phone (250) 255-8875, email granthillhome@outlook.com or follow Pause to Feathers Creations on Facebook. To see his vast array of products available visit the Williams Lake Farmers’ Market online store at https://www.localline.ca/williams-lake-farmers-market