Protecting Wild Salmon – What If The Stories We’ve Been Telling Have Been Wrong? 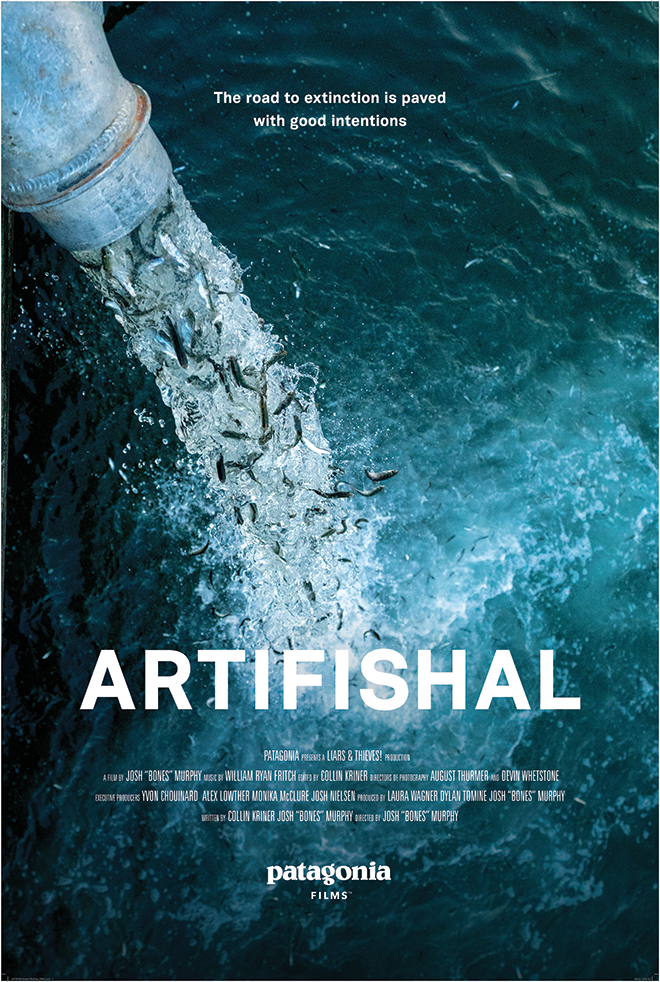 In the newly released Patagonia documentary Artifishal an Indigenous fisher is quoted saying, “Many of today’s problems are a result of the stories we were told or told ourselves that were wrong.” We’ve been told that hydroelectric power is clean, even ‘green,’ and that damming wild rivers – wild salmon rivers – can be compensated by fish ladders, transporting returning salmon around dams, and by hardworking fish hatcheries.

Artifishal is Patagonia’s most recent eye-opening documentary. The iconic outdoor clothing and equipment manufacturer began making documentaries in 2014 with Dam Nation, a film that explores the impacts of hydroelectric dams. Artifishal looks at the other three Hs that impact wild salmon: habitat, harvest, and hatcheries. The film explores the staggering financial, cultural, and ecological cost of our blind belief that human-constructed solutions can make up for habitat destruction. Artifishal traces the impact of our fish factories – public hatcheries and private fish farms – and their ongoing high cost to the taxpayer and the environment.

For Yvon Chouinard, Patagonia founder and the film’s executive producer, Artifishal highlights a classic human folly. “Humans have always thought themselves superior to nature and it’s gotten us into a lot of trouble,” he says.

In recent years, thanks to Dr. Alexandra Morton and Dr. Kristi Miller, the public has become aware of both the ecological and human health impacts caused by the predominantly foreign-owned Atlantic salmon fish-farming industry. It has been far less popular to talk about fish hatcheries because they have become the fabric of so many communities wanting to give back to the environment, and because government agencies have evolved to unquestioningly spend millions of dollars supporting these artificial breeding programs in the name of salmon conservation.

There has been a growing body of literature, however, that not only indicates that rearing fish in hatcheries (high densities in flow-through tanks) does not create the same fish as those bred in streams but that hatchery-born fish are interfering with the survival of wild salmon. Salmon are highly complex creatures that have evolved over thousands of years, and many river-specific runs migrate not just hundreds but as much as a thousand miles upstream. Research reveals that returning salmon record all sorts of information in their genes, reflective of their specific journeys, literally equipping them to navigate a constantly changing environment.

As far back as 2001, the Norwegian Journal of Freshwater Research was already sounding the alarm. Sigurd Einum and Ian Fleming reported that hatchery rearing of salmonids resulted in increased pre-adult aggression, decreased response to predators and decreased survival. A decade later, the Skagit River System Cooperative published a 2013 study that found hatchery smolt releases had a highly significant negative effect on native Skagit steelhead returns. Researchers discovered an inverse relationship between hatchery smolt releases and wild steelhead returns over the past 30 years. They conclude this trend is potentially due to negative biological interactions between hatchery and wild steelhead including increased juvenile competition, increased susceptibility to predators such as bull trout, lost spawning effort when wild fish spawn with hatchery fish, and reduced fitness when wild fish hybridize with hatchery fish that have significantly reduced marine survival rates.

By artificially breeding every fish that returns to a specific area, are we not ‘dumbing-down’ the gene pool, reversing natural selection to the point of devolving these highly complex and resilient fish?

After Mount St. Helens (known as Lawetlat’la to the indigenous Cowlitz people, and Loowit or Louwala-Clough to the Klickitat) erupted in 1980, wild steelhead runs not only returned to the drastically changed Toutle River but returned in even greater numbers than previously recorded.

The film also unveils the huge financial costs that have been invested in the hatchery industry. Although Washington State spent $320 million decommissioning the Elwha River Dam, they then turned around and spent $17 million on a new hatchery, negating the whole purpose of decommissioning in the first place.

Moreover, Artifishal reports that the average hatchery fish size has dwindled from 22 lb to 10-12 lb, and if that wasn’t sufficiently alarming, Oregon’s Bonneville Power Administration painstakingly calculated that it spends $68,000 per hatchery steelhead.

If the stories we’ve been told or we’ve told ourselves have been wrong, what should we do?

Melissa Chaun of Port Moody is an ecologist with a passion for all things sustainable. She is events co-ordinator with the Rivershed Society of BC and volunteers on various city committees.