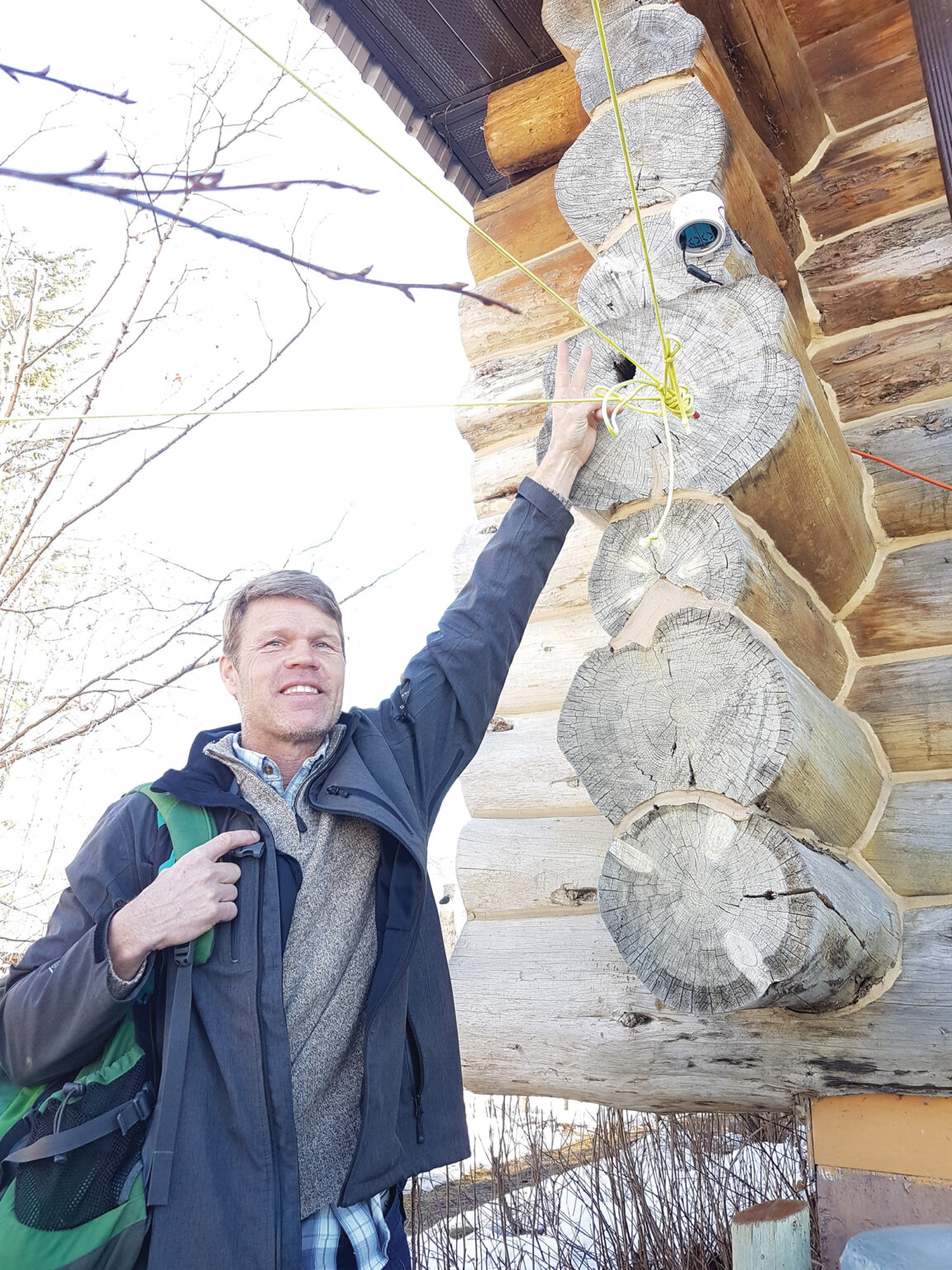 Martin Kruus, education coordinator for Scout Island Nature Centre, shows what a PurpleAir monitor looks like. This one, installed on the Nature House, is among several others throughout the city that collect data on fine particulate matter. Photo: Erin Hitchcock
Share
Facebook Twitter LinkedIn Pinterest Email

Sometimes we notice the air is not quite right: smog or smoke from forest fires looming in the sky gives us a clue that maybe it’s not such a good day to be outside. But often we don’t recognize that the air quality is worse than it is or realize the health hazards involved.

Ten PurpleAir monitors were installed in Williams Lake last fall to collect data on particulate concentrations, providing an opportunity for increased understanding and education, and the opportunity to find solutions.

The PurpleAir units are unique from the existing, more high-tech, regulatory instruments located near Columneetza Secondary, due to their affordability, which makes it feasible to have them located throughout the community. This could prove helpful in identifying particulate matter in specific areas. From there, one could begin to identify the causes.

Martin Kruus, education coordinator with Scout Island Nature Centre, one of the partners in the local citizen project, set up many of the PurpleAir monitors in the community in both residential and industrial areas: Westridge, Commodore, the golf course, South Lakeside, North Lakeside, Glendale, downtown, Scout Island, lower Hodgson, and Columneetza, the latter of which can be compared with the existing regulatory station there.

It’s important to have monitors set up in numerous locations, as air quality can differ in various areas due to factors such as inversions, industry, high-vehicle use, or woodstove use, for example. PM 2.5 (2.5 micrometers or less) is about 30 times smaller than the width of a human hair and “goes all the way down to the bottom of your lungs,” Kruus says. “This is the most harmful particulate size for human [respiratory system] health.”

Pinnacle Pellet and Atlantic Power covered the cost of the ten units ($300 each) that are about the size of a pop can or oil filter, as per requirements in their permits to participate in ambient air monitoring. The information will be used to help the public understand air quality in the community, but it will not be used for the Air Quality Health Index or for regulation, as the PurpleAir monitors are not of regulatory standards.

Gavin King, air quality meteorologist with the Ministry of Environment and Climate Change Strategy, will analyze the results after a year. “One of the biggest advantages of this type of study is that it lets the public get a broader picture of what’s happening across their community,” King says.

University of British Columbia professor Peter Jackson, who teaches classes on weather and climate in the Geography, Earth and Environmental Sciences department, and his graduate student Brayden Nilson, are mapping the monitors on the University of Northern BC website, as well.

After studying PurpleAir monitors across North America for the last five years, Jackson feels confident with their reliability, as the data are compared with government monitors and corrected. Because they use laser sensors, PurpleAir monitors can give erroneous values due to certain environmental issues, such as fog and localized dust.

“By looking at the two kinds of monitors together, it gives us an assurance that the PurpleAirs are doing a pretty good job because the numbers are similar to what the governmental monitors show, after we correct them,” Jackson says, adding that while industry can often play a role in particulates, the public can as well, especially when it comes to woodstove use and vehicle emissions, including unnecessary idling. Environmental factors such as dust and forest fires can also contribute to concentrations.

In addition to the ten in the Lake City, another four monitors are in the works at Sugar Cane, through a separate agreement between the ministry and the Williams Lake First Nation.

Anyone can view current data by visiting cyclone.unbc.ca/aqmap/index.html#4/56.44/-109.09 and purpleair.com.

Scout Island Nature Centre would also like to thank local residents and businesses for hosting the monitors.

Erin Hitchcock is an Air Aware educator with Scout Island Nature Centre. Visit our newly updated website at breatheasywilliamslake.org and like us on Facebook at Air Aware Williams Lake. We gratefully acknowledge the financial support of the Province of BC through the Ministry of Environment and Climate. Change Strategy.