Scenes from the Puddle: Mountain Biking Around Williams Lake 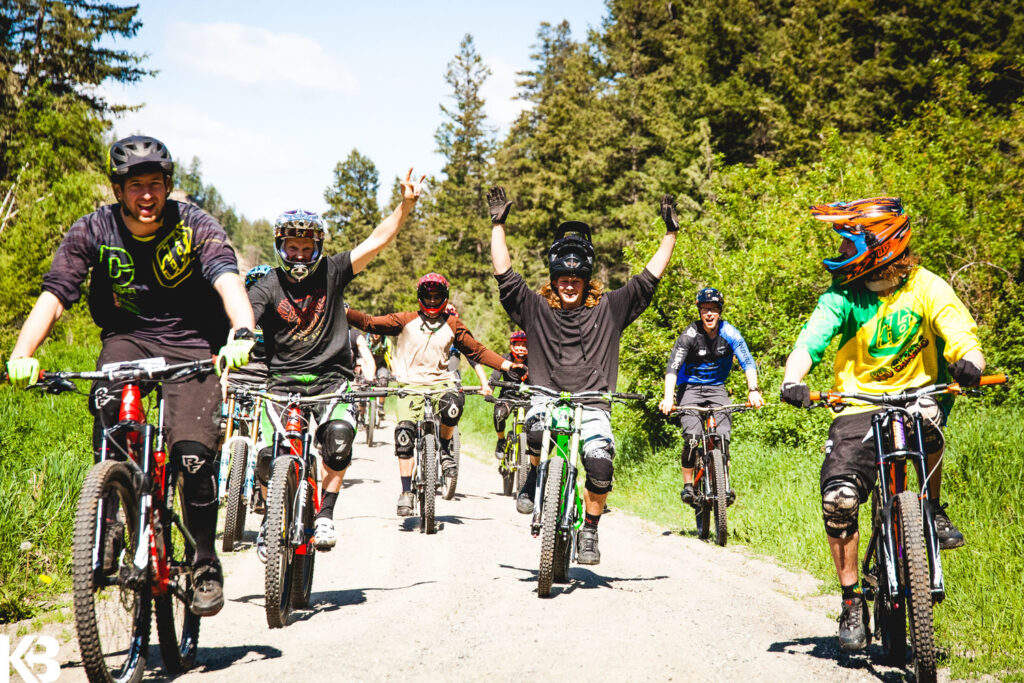 Williams Lake, aka the Puddle, is not unique in being home to great mountain biking. Sure, we have been dubbed the Shangri-La of mountain biking by Bike Magazine, and most recently called “BC’s Best Adventure Town,” by Explore magazine, but we live in a beautiful province filled with amazing sites and really good trails, just about everywhere. There are a couple of things that separate us from the crowd though; first, the sheer size of our entire trail system—180 plus trails, four networks, and over 350 kms of single track. Second, the ease that one can access the three networks that surround Williams Lake. All three local trail networks are less than a ten-minute ride from almost anywhere in town.

Described as “diverse, evolving, gritty, inclusive” and “pretty fuc#ing fun,” the riding scene around the Puddle is easy to get involved with.

Whether you’ve always wanted to check out the region, live here and want to learn more, or spend a lot of time riding, once the snow is gone it’s time to hit the trails around the puddle. You can usually ride Fox Mountain. in early spring. Then, as the weather warms, the Westysde followed by the Southsyde open up and the riding goes till it snows!

For access to trailhead info, current trail conditions and real time GPSing while you ride, check out www.trailforks.com.

Although not indicative of the entire trail, this picture captures the crux: a technical downhill rock section that involves smart line choice, commitment to that choice, and just letting it run! With a northern exposure, carpets of green moss cover large areas of rock as the trail ultimately leads you into the heart of the Southsyde network.

Driving southwest towards Sheep Creek Bridge from Williams Lake, you can see the scree field on the left as you look up to the top of Pablo Mountain. Looking north from the top, with Highway 20 and the Fraser River in the background, Boulderdash trail follows a ribbon of white created when the surrounding rock was flipped over. Not for the faint of heart nor beginner, Boulderdash is an uncompromising natural black diamond trail as difficult to get to as it is to ride. The trail was featured on the 2003 TV series, “Drop In.”

One of the original trails in the Fox Mountain network, Hillbilly Deluxe, was built in the late 90s. Originally featuring sketchy stunts made from branches, small trees, and scrap wood, this trail was challenging. Built along a meandering shallow gulley, the upper portion of trail banks up and down the gulley’s sides, carving a dirt line through the forest littered with technical trail features (TTF). In 2004, the Ministry of Forests (MOF) declared the trail too risky and had the TTFs removed. This became the catalyst for the formation of the William Lake Cycling Club. In 2005, MOF provided $1,000 worth of local rough cut 4×4’ timbers to the rebuilding of these stunts. It is one of the favourites.

This trail itself is iconic. Built in the late 90s, it featured skinnies, long stunts, teeter totters, and more, and was a must stop for mountain bike touring companies passing through Williams Lake. Over time the trail changed and evolved, always with the theme within the board game, Snakes and Ladders. In 2011, it was recognized that this trail merited a serious rebuild. With support and partnerships with local groups and organizations, over two km of new trail was built, ending in the Williams Lake River Valley. The entire trail received a face lift, with new stunts and features including the still infamous, “Sky Berms”. These two elevated and massive towering wooden berms are among the highlights of this trail, as well as a 15-meter-long suspension bridge and many other TTFs.

Desous Mountain, Shiny Badger, and So Long, both backside trails

Once a diamond in the rough, Desous Mountain is rugged and long. The network began in the90s with a few trails on the front side, and later a few down the backside towards the Fraser River. It is now a polished gem of a network. Located 30 minutes from town, Desous Mountain has 1000 m of vertical and includes four new front side trails, plus the original four—three backside downhill lines, and a new backside climbing line, “Shiny Badger, Hidden Canyon.” Add a spacious campground with a unique outhouse and Desous has become the diamond of Shreddy’s eye. With epic views of the Fraser River looking north and south and the granite slabs on the cliffs of Desous, the sights are breathtaking. The 11km climbing line, Shiny Badger, provides new access from either side, eliminating the necessity of a shuttle. Desous is truly a world class destination for mountain biking. Shawn Lewis has been president of the WL Cycling club since 2008, and he loves to ride, build, and maintain trails, and get outdoors. Build trails, ride bikes!