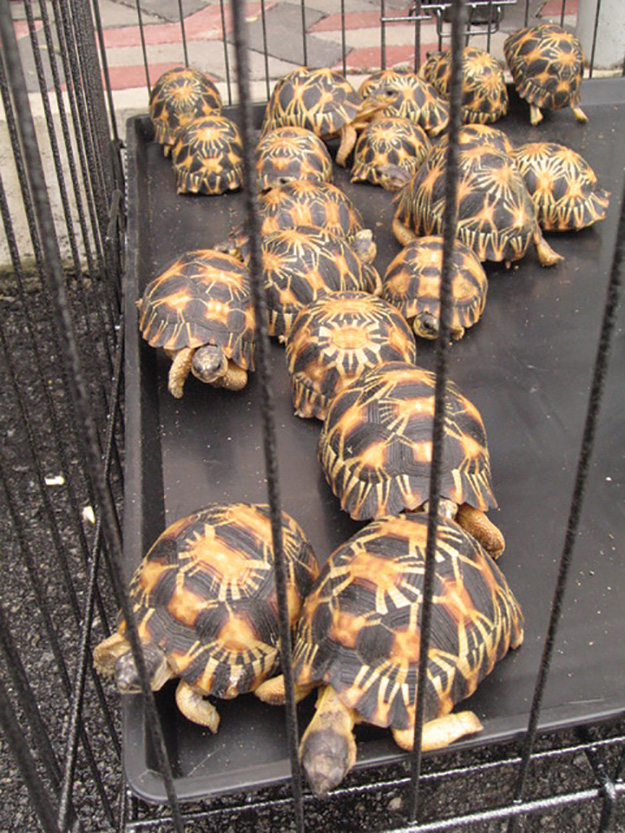 Globally, there are 353 species of tortoises and freshwater turtles, and of these the conservation status of 251 species has been assessed by the International Union for Conservation of Nature (IUCN) Red List of Threatened Species (a comprehensive inventory of the global conservation status of species). The assessments highlight the dire straits this group of ancient species is in, with 154 being considered Threatened (Critically Endangered, Endangered, or Vulnerable), and, sadly, a further eight species are already extinct.

While this group of species faces a myriad of threats, illegal and unsustainable wildlife trade is the overall greatest menace they face. Having outlived the dinosaurs, the world’s tortoises and freshwater turtles are being wiped out now by human greed. The demand for these species—for their meat, their shells, and their bones used in traditional medicines and live as pets—is pushing them towards extinction.

But the driver that has the most global reach and is currently impacting the greatest number of species around the globe is the demand for pets, which includes a wider variety of species, and trade flows that involve more countries. Especially rare and/or attractive species are being poached and illegally marketed to the high-end international pet trade, especially in Asia, North America, and the European Union. While much of this trade is legal, illegal trade is still rampant. Tortoises and freshwater turtles are among the most commonly found animals in seizures made by law enforcement officers. Weak legislation and poor enforcement facilitate the international trade in these species and as a result, an increasing number of species are threatened with extinction. In 2018, almost 10,000 Radiated tortoises, Astrochelys radiata, were seized in two seizures in Madagascar. On June 30, 2019, 500 Indian star tortoises were seized on a train from India. More than 200 Eastern box turtles, Terrapene carolina, were seized in the United States in September 2019.

China is the greatest consumer of tortoises and freshwater turtles in the world, but the demand in other countries is on the rise.

One of the most frequently trafficked species for the global black market is the Indian star tortoise, Geochelone elegans (assessed as Vulnerable in the IUCN Red List of Threatened Species). This stunning little tortoise is in high demand, largely due to the beautiful patterns on its carapace from which its name is derived. It is fully protected in its three range countries (India, Pakistan, and Sri Lanka), but poaching and illegal trade continues to be the primary threat to the survival of wild populations of Indian Star Tortoises. Indian star tortoises are smuggled out of their range countries to many parts of the world, in particular to Southeast Asia, with India being the main source.

One recent study found at least 55,000 (mostly juvenile) tortoises had been collected from just one location (comprising 16 villages) from the Indian state of Andhra Pradesh over a period of one year. As a result of the high levels of illegal trade, the Indian star tortoise has recently been included in Appendix I of the Convention on International trade in Endangered Species of Wild Fauna and Flora (CITES), which generally prohibits international trade in the species and provides stronger legislation for use by the more than 180 member countries (Canada is a member) to assist the three range countries in enforcing their national laws set out to protect the species. While such actions are a positive step towards combating the illegal trade, the fact that such strong actions are required signifies a failure of the international community to prevent these species from over-exploitation in the first place.

Clearly, far more effort is needed, at national and international levels, to significantly reduce illegal and unsustainable trade in tortoises and freshwater turtles, and to help populations of threatened species recover. Everyone has a role to play in this effort. Learn more about tortoises and freshwater turtles and their conservation needs. Get involved in or support efforts to save these incredible species from extinction. Obviously, if you are considering purchasing a tortoise or a freshwater turtle as a pet, do your homework—ensure the specimen you are considering has come from a legal source. If in doubt, don’t buy it.

Dr. Chris R. Shepherd is an active member of the IUCN SSC Tortoise and Freshwater Turtle Specialist Group. He and Jordi Janssen both work for the Monitor Conservation Research Society (Monitor) where Dr. Chris R. Shepherd is the executive director and Jordi Janssen is a program officer and lead on reptile-related work. For more info see Monitor’s website: www.mcrsociety.org or Facebook page www.facebook.com/mcrsociety