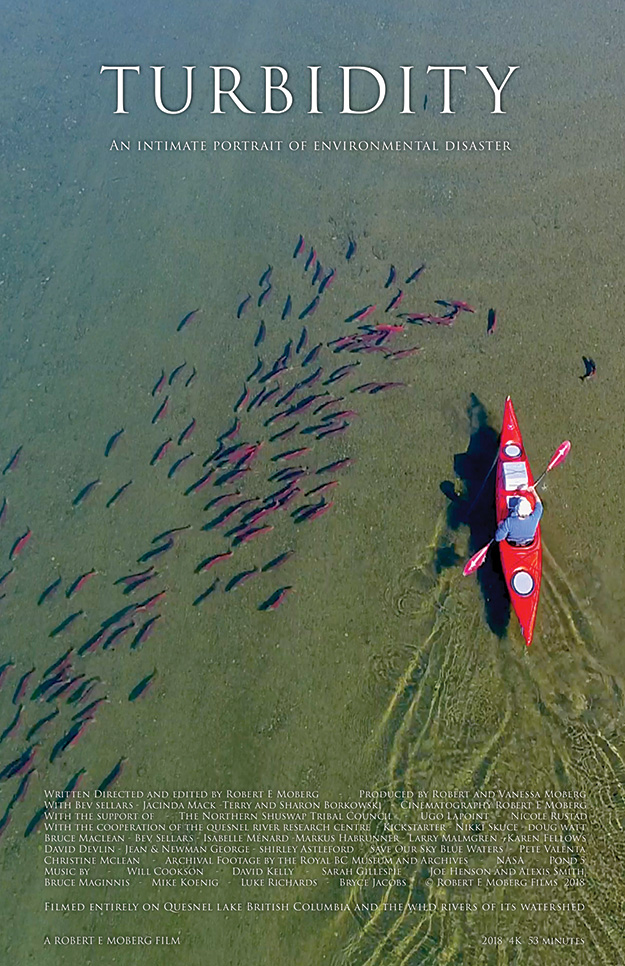 A Film by Robert E. Moberg –

It was August 4, 2014 when the provincial news media called requesting footage of an “incident” at the Mt. Polley mine. I grabbed my camera gear and set out on the short flight via helicopter, my nephew, Kelly, at the controls. From about ten kilometres out we began watching for the strange bright green water of the lake-sized tailings pond, a well-known landmark. As we approached the mine, I remember feeling confused at not being able to locate the huge pond. “Where is it?” I asked. Kelly was looking ahead, equally confused and said simply, “It’s gone.” We could see that the four-square-kilometre “containment facility” had burst through its huge earthen dam. Eye witnesses spoke of a terrible roar that lasted for almost hours as the putrid water thundered down Hazeltine Creek and on into Quesnel Lake. Hundreds of trees snapped off by the powerful torrent now littered the shoreline and drifted in huge piles on the lake. An eerie green plume of murky tailings water travelled down the once pristine body of water for miles. The scene was one of incomprehensible devastation. The footage we captured went nation wide—the dreadful story was out.

The deeply personal effect of this larger than life event has had lasting reverberations on the environment, the community, and the individual. Although Quesnel Lake has survived, a sense of loss has permeated our lives. The dark waters from the breach have settled into the depths of our lakeand into the deepest part of our collective consciousness.

The most profound and lingering effect, a loss of innocence or perhaps more so, trust. We are left with a feeling of cynicism with regards to corporate accountability and governmental responsibility. Yes, Quesnel Lake is still here, but its waters are deeply scarred, and we are forever changed. As we stand on the shoreline of this vast body of water, the transcendent and eternal has become vulnerable. Sadness and anxiety overcome us with the realization that this, too, can be lost forever.

Weighing further on our conscience is the sad fact that we all must bear responsibility for these tragic environmental disasters. Our consumer-driven economy and demand for jobs compel the politicians we elect into making fateful decisions to placate the masses—decisions that, more often than not, exploit our natural resources with terrible consequences.

As a filmmaker with a passion for the environment I felt an obligation to tell this story. My wife, Vanessa, and I spent countless hours filming the stunning landscapes of Quesnel Lake and the beautiful rivers of its watershed. The film explores themes of memory, love, and our complicated relationship with the natural world. Turbidity is an intimate portrait of environmental disaster.