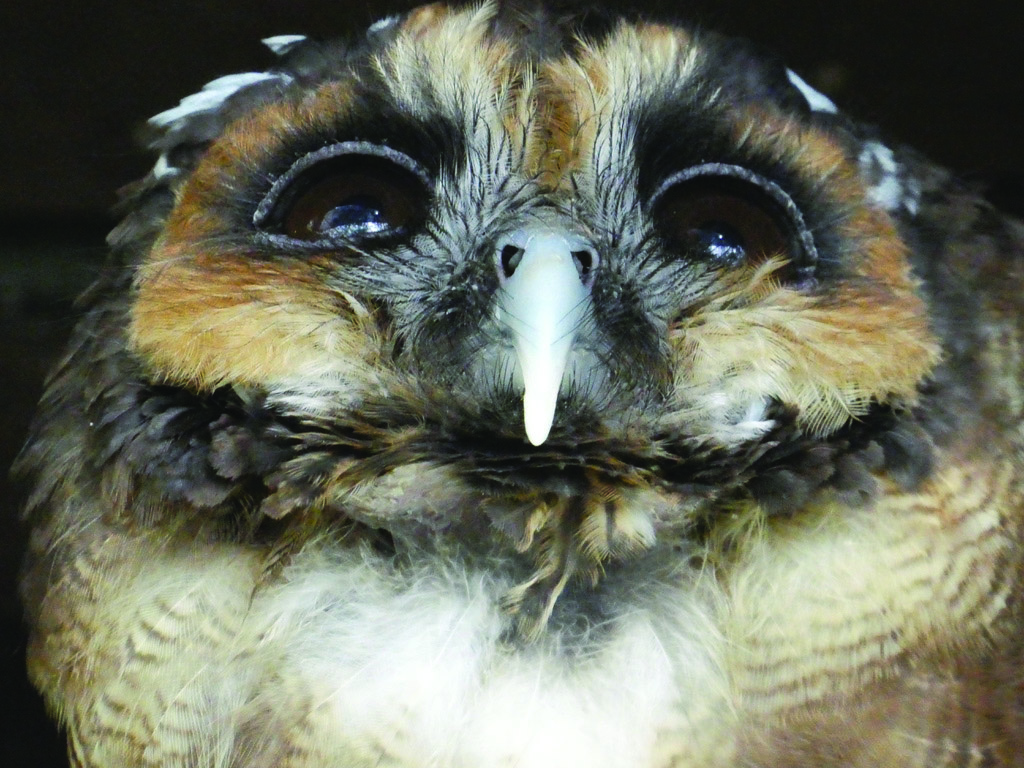 A Spotted wood owl (Strix seloputo) languishing in a cage in an Indonesian bird market. Most owls in trade do not survive long due to stress and inappropriate diet. Photo: Lalita Gomez/Monitor
Share
Facebook Twitter LinkedIn Pinterest Email

Everyone knows what an owl is, but few people actually know very much about owls. Globally, there are 234 species of owls, with 216 of these belonging to Family Strigidae and 18 to Family Tytonidae. For centuries, people have kept owls as pets, consumed them as food, and harvested their parts in traditional medicines and forms of black magic. However, anthropomorphic pressure, including commercial trade, is threatening owls on an unprecedented scale, and as a result, many species being pushed towards the brink of extinction.

Recently, the demand for owls as pets has increased tremendously. A relatively new phenomenon is the animal café, found in countries like Japan, which display owls and offer physical interaction and photography with the birds. This also links to the popularity of social media selfies with rare, exotic animals.

While keeping rare and exotic species such as owls as novelty pets has gained in popularity overall, the Harry Potter movie series has played a big part in the increasing the demand for owls. The lead character, Harry, had a pet Snowy Owl named Hedwig. In Indonesia, owls are generally called burung hantu (ghost birds), but since the release of the first Harry Potter movie in 2001, traders in the bird markets often refer to owls as ‘burung Harry Potter’ (Harry Potter birds)!

Indonesia is well known for having some of the largest bird markets in the world and an enormous demand for caged birds—owls are no exception. Owls are often openly displayed for sale in bird markets across the country, despite the trade in these species being illegal. Owls are protected by law in Indonesia, but as illustrated by the open trade in these markets, there is a blatant disregard for legislation, facilitated by corruption. Dealers display owls chained to small perches or in small cages at storefronts, and they most often have more within. As owls have specialized diets and do not cope well with the poor conditions traders and buyers usually keep them in, it is very likely that many of these birds perish not long after purchase.

Very little research has been focused on owls in many parts of the world, especially tackling the illegal trade in these amazing nocturnal birds of prey. In Southeast Asia, the Monitor Conservation Research Society (Monitor) carries out surveys of the bird markets across many countries, and we often observe and record owls during these inventories, allowing us to contribute data towards stronger policies, more effective enforcement, and more strategic and informed conservation efforts.

In 2016, a Scops owl was observed by an Indonesian researcher in a bird market in the city of Mataram on the Indonesian island of Lombok. At the time, it was mistakenly identified as a Wallace’s scops owl Otus silvicola, which is native to the nearby islands of Sumbawa and Flores. A few months later in December, another researcher recorded four scops owl chicks for sale at one of the seven bird markets he visited in or near Mataram, but no identification of these was made. In June 2019, nine more scops owls were observed during a survey of the bird markets in Mataram, and they were identified as Rinjani Scops owls Otus jolandae. This is the first time this species had ever been confirmed to be in trade.

Named after Mount Rinjani on the Indonesian island of Lombok, the Rinjani Scops owl was only described as a new species in 2013, is the only endemic bird species currently known from Lombok, and is the island’s only species of scops owl. This species is known to be threatened by habitat loss, but these records now confirm that illegal capture and trade are an additional threat. Species endemic to small islands are far more vulnerable to exploitation.

The Rinjani Scops owl is a fully protected species, effectively prohibiting the capture and/or trade of wild-caught individuals. Violation of the law stipulates a five-year prison sentence and a fine of IDR 100 million (CAD $8,475). Continual monitoring of the markets in Lombok and effective enforcement there is essential to ensure illegal trade does not become a greater threat to this species.

Monitor is currently developing a strategy and seeking support to combat the illegal and unsustainable trade in owls to better inform the development of stronger policies, to support enforcement efforts, and to catalyze conservation actions.

If you would like to learn more about Monitor’s work on the illegal and unsustainable wildlife trade and how you can support our projects, please visit our website at mcrsociety.org