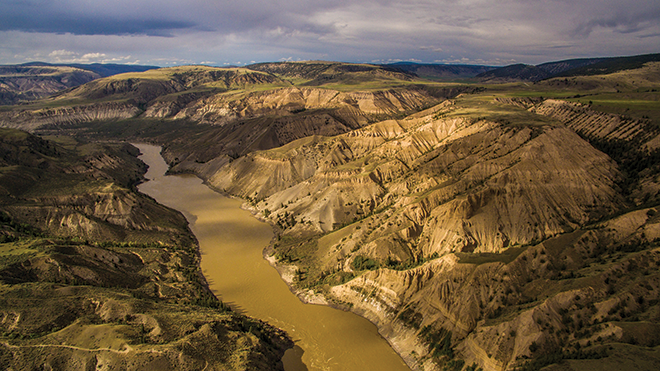 Mark Angelo has had a love of rivers and fascination with moving water since he was a boy. As a teenager, he became an avid paddler and fly fisher, and throughout the 70s he spent a lot of time exploring BC rivers in every region of the province, including a summer-long paddle trip along the length of the Fraser River in 1975.

“At the end I was so impressed with this river, its beauty, power, and diversity,” says Angelo. “At that point I started thinking, wouldn’t it be wonderful if there were an event to celebrate how special rivers are in BC? I’ve paddled around world and I believe we have the world’s finest river heritage here in our own province.”

An academic at BCIT, and Rivers Chair with the Outdoor Recreation Council at the time, Angelo decided to act on the idea. He and colleagues spread the word and approached the provincial and local governments to endorse a day of celebration for waterways in BC. It was a hit.

“We kicked it off with one event: a river clean-up on the Thompson River,” says Angelo. “We had volunteers and a flotilla of rafts, and we worked with a towing company to remove car wrecks from the banks of the river. We removed several tonnes of garbage, including the wrecks from the river and its banks. Later that night we met in the pub and planned a few events for the next year, and after that it took on a life of its own.”

In 2005, Angelo approached the United Nations about creating a World Rivers Day, which has become one of the biggest environmental celebrations on the planet occurring on the last Sunday in September.

“It struck a chord with people because it celebrates the natural and cultural values of waterways and tries to engage people with those waterways,” says Angelo. “World Rivers Day has also strived to create a greater awareness of the pressures rivers face, and it encourages people to be advocates, increases awareness on so many fronts, and promotes educational activities around protecting and understanding waterways.”

On a global scale, rivers face an array of threats from things like pollution, including anything from industrial sewage to plastic, which travels to the ocean via flowing water. Urbanization is another major threat because it contributes to pollution and leads to the destruction of riparian habitat. More than half the world’s population lives in urban settings, and the numbers only grow.

“No one can deny climate change is a huge issue, nor can anyone deny the impact of that on rivers,” says Angelo. “Rivers are long, linear, vulnerable features that travel through multiple jurisdictions and face an array of threats and pressures. Protections of waterways in general is easily one of the world’s most pressing environmental issues.

He points to the Fraser River as an example of an important, diverse, and sensitive ecosystem that needs help to remain healthy and productive.

“I think the Fraser River is one of the world’s great waterways, and it has a special place in my heart,” says Angelo. “The Fraser watershed is a microcosm of the issues confronting so many rivers globally, including climate change.”

The Fraser and its tributaries confront habitat issues, especially along what is known as the heart of the Fraser, which is the section between Hope and Mission. “This is one of the most productive stretches on planet, and it is under immense pressure,” says Angelo. “There is a major effort now underway to try to protect these habitats while we can, including the Fraser islands and the channels around them, which are so important to species alone.”

Despite a vast web of complex, interrelated pressures on rivers and other waterways, Angelo believes there are many things the public can do to help preserve and protect these areas.

When he started as a streamkeeper 50 years ago it was a lonely undertaking, he says. “Now, there are stream-keeping groups and advocacy groups with eyes and ears on local waterways all around the province. That has been a huge step forward.”

He encourages advocacy work, volunteer-ism, and mindfulness around waste disposal and water use habits at home and work.

“We can all try to be and do our best to be models on that front,” he says. “For those who have young people in their lives, spend time with them along creeks and rivers so they can learn to value, protect, and properly care for these places.”

“As Canada’s longest unobstructed rivers, the Fraser in particular remains one of the great rivers on the planet,” says Angelo. “It brings significant natural, cultural, and recreational value to us all. I’ve always viewed it as the heart and soul of the province.”