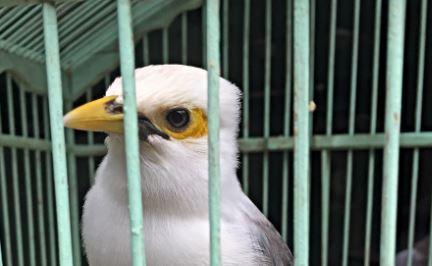 Having birds around is something most Canadians take for granted. Spring, especially, is full of bird songs as the migrants return and mating season’s singing rituals commence. However, in some parts of the world, these songs are being silenced by the illegal and unsustainable wildlife trade.

Globally, the illegal wildlife trade is estimated to be worth between US$7 billion and US$23 billion annually. While its clandestine nature makes accurate valuation impossible, it is considered the fourth most lucrative global crime after drugs, humans, and arms. It is recognized as a major threat to biodiversity, often acting in concert with habitat loss and hunting, compounded by unchecked demand, weak legislation, lax enforcement, public indifference, and widespread corruption—and it is pushing a multitude of birds towards imminent extinction.

At current rates of over-harvesting and habitat conversion, it is estimated that one-third of Southeast Asia’s bird species will be extinct by 2100, with at least 50% representing global extinctions. Of the approximately 850 species of bird native to Southeast Asia, more than 50 are assessed as Critically Endangered by the IUCN Red List of Threatened Species.

Birds are traded for meat, for their parts used in traditional medicines, and as cagebirds. Among the birds in trade are the songbirds. Desired for their remarkable singing abilities, colourful plumage, and increasing rarity, Southeast Asian songbirds are trapped in the millions from the wild and traded on both a national and international scale.
Despite many species being afforded legal protection by national laws and regulatory policies in some countries, enforcement efforts are often lacking, allowing the songbird trade to continue unhindered. Enforcement takes a backseat, often because the authorities lack the necessary knowledge and awareness. Although sellers are often found to be aware of the illegality of their actions, they are not deterred by any threat of prosecution.

The fascination with songbirds is deeply ingrained in various Asian cultures and involves hundreds of species. Throughout the region, particularly in Indonesia, Malaysia, Thailand, and Singapore, songbird competitions, where birds are judged on their singing abilities, are highly popular. Songbirds, especially rare species or those extraordinarily attractive, are also frequently kept as status symbols.

Indonesia is at the centre of this conservation crisis, having more species of songbirds threatened by illegal and unsustainable trade than any other country. Already, many endemic species have been pushed to the edge, with only a mere handful of individuals left in existence, such as the Black-winged myna Acridotheresmelanopterus, the Javan green magpie Cissathalassina, the Rufous-fronted laughing thrush Garrulaxrufifrons, and the Niashill myna Gracularobusta. Some species, such as the Javan pied starling Sturnus jalla, are believed extinct in the wild and remain only in the hands of collectors and traders.

In 2015, the Southeast Asian Songbird Crisis Summit was heldin Singapore, gathering experts to address the crisis with utmost urgency. The summit saw the formation of the Southeast Asian Songbird Working Group, which would devise a Southeast Asian songbird action plan. In 2016, the Conservation Strategy for Southeast Asian Songbirds in Tradewas launched, which included a list of high priority species and necessary actions to stave off their extinction—some of these numbered fewer than 100 individuals. In 2017, the IUCN SSC Asian Songbird Trade Specialist Group (ASTSG) was formed to further elevate efforts. Made up of experts from conservation organizations, academia, zoological institutions, and enforcement agencies,it is tasked with conducting research on the taxonomy and wild populations, monitoring trade, lobbying for enhanced protection and effective enforcement, establishing and expanding ex situ assurance and breeding colonies, and developing education and community outreach. In early 2019, the ASTSG met for the first time since its formation to identify immediate priorities for the more than 40 species listed as priority species that will likely vanish if actions are not taken.

The Monitor Conservation Research Society (Monitor), established in 2017, has joined this effort to protect songbirds from extinction. Through its Asian songbird programme, Monitor aims to put the Southeast Asian Songbird Conservation Action Plan into motion by concentrating on trade, legislation and enforcement. By continuing extensive research in key countries within Southeast Asia, Monitor seeks to gather much needed trade data—the lack of evidence and information is the greatest obstacle to legally protecting these species. Finally, to ultimately eliminate or significantly reduce the illegal and unsustainable trade in songbirds, government buy-in in the countries in question is essential. Monitor and partners will use evidence obtained through research on the trade to assist and lobby governments in key countries to increase their enforcement efforts, improve existing laws and policies and provide effective protective measures to commercially traded species. Through these efforts, it is hoped the songs of all Southeast Asia’s songbird species will be heard in the wilds forever.

Dr. Chris R. Shepherd is a vice-chair of the IUCN SSC Asian Songbird Trade Specialist Group and is the executive director of the Monitor Conservation Research Society (Monitor). Having worked on wildlife trade issues for more than 25 years, Dr. Shepherd focuses largely on lesser known species and species groups threatened by trade, such as the songbirds.