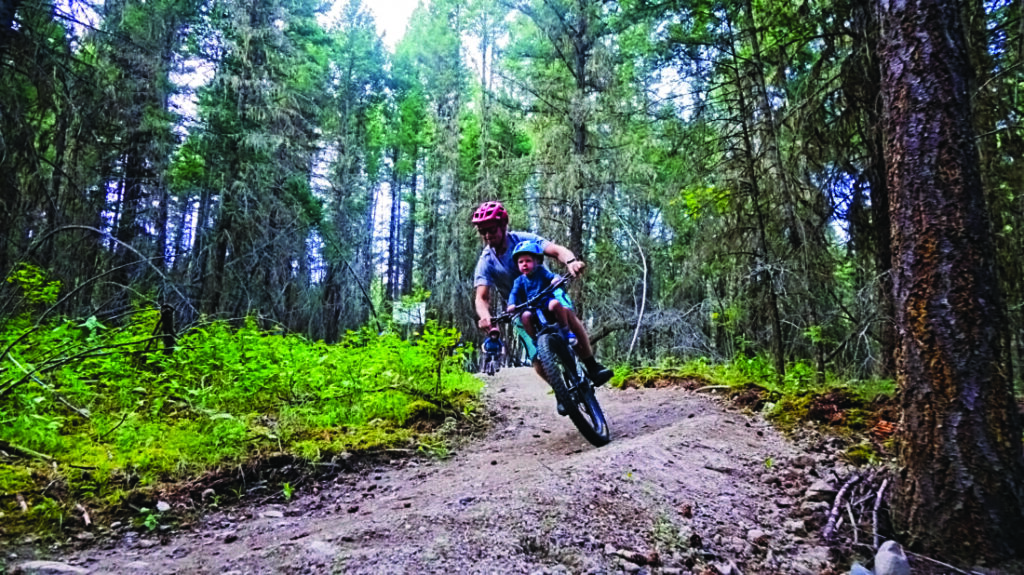 With Finn Bobrowski strapped into his Mac Ride, his father, Russ, pilots the way down Fox Fire with older brother Louis close behind. The new flow trail will be a level up from this trail and promises to be an exhilarating ride with bigger features, more berms, and plenty of jumps. Photo: Scott Horley
Share
Facebook Twitter LinkedIn Pinterest Email

Fresh off the success of Williams Lake’s first machine-built trail, Foxfire, the Williams Lake Cycling Club (WLCC) sought after and received funding for another project: a machine built intermediate flow trail on the east end of the Fox Mountain network. This funding came from the provincial Community Economic Recovery Infrastructure Program (CERIP) and is one of four projects in Williams Lake that received funding.

What is a flow trail you might ask? To quote Google, “Flow trails are built mountain bike (MTB) specific and go downhill. They have bermed turns, rollers, jumps, and other features that allow you to keep your speed up with minimal pedaling…” My definition is similar, but I would add, “fun, smooth, and flowy” to the mix as well as “a trail for most levels of riding and one that will allow you to confidently build your skills as you progress down the mountain”.

A flow trail is not something that has always been sought after in Williams Lake. After all, we are known as the Shangri-la of MTB because of our single track, the variety of trails we have, and the connectivity between the three networks that surround town. So why a flow trail?

According to Pinbike, flow trails are becoming very popular and are some of the most popular trails in the world. Half Nelson in Squamish, BC, is amongst the top two and is a considered a “must ride” if you’re in the area. The WLCC wants in on that action and sees this as an opportunity to build a destination type trail that will complement our existing infrastructure and attract a larger variety of rider

With covid-19 effectively limiting most travel, the value of outdoor recreation close to home has never been more apparent. With amazing fishing, beautiful rivers, lakes, and spectacular mountains to play in year-round, we have it all. Add in four different MTB trail networks, containing over 180 trails and 300 km of single track, and Williams Lake truly has world class outdoor recreation. Why not build on our reputation and add to the mystique?

The funding from CERIP has also allowed us to build trail management capacity as it has created new opportunities for new companies to get involved. New Path Forestry, owned and operated by Williams Lake’s own Jeremy Stowards, has taken on the challenge of carving their way up and down Fox Mountain, crafting their own version of flow as they navigate their way through the landscape.

Of course, a project of this magnitude couldn’t have happened without a large support group. Russ Bobrowski, WLCC vice-president, spearheaded the proposal and along the way gathered the backing of many players. The Williams Lake First Nation and Sugar Cane Archaeology were prominent in the role of guiding the development of the line through culturally sensitive areas with multiple field walks. Rec Sites and Trails BC signed off on the project and letters of support from the City of Williams Lake and others helped get this project approved.

I want to personally thank all the people involved in this project and the Province of British Columbia for recognizing the value of developing world class recreation close to our home, Williams Lake. Line work has already commenced with the goal of having a rideable trail by the end of the 2021 and the entire project completed by summer of 2022.

I hope you all have the opportunity to enjoy the great outdoors that surround us. Now get outside!

Shawn has been riding mountain bikes on the trails surrounding Williams Lake since the late 80s and has been building and maintaining trails since the early 90s. His biggest passion is fostering love for the sport and he hopes the well maintained and protected network that surrounds the community is his legacy. Shawn has been president of the WLCC since 2009 and is proud of the team they have assembled to move forward.