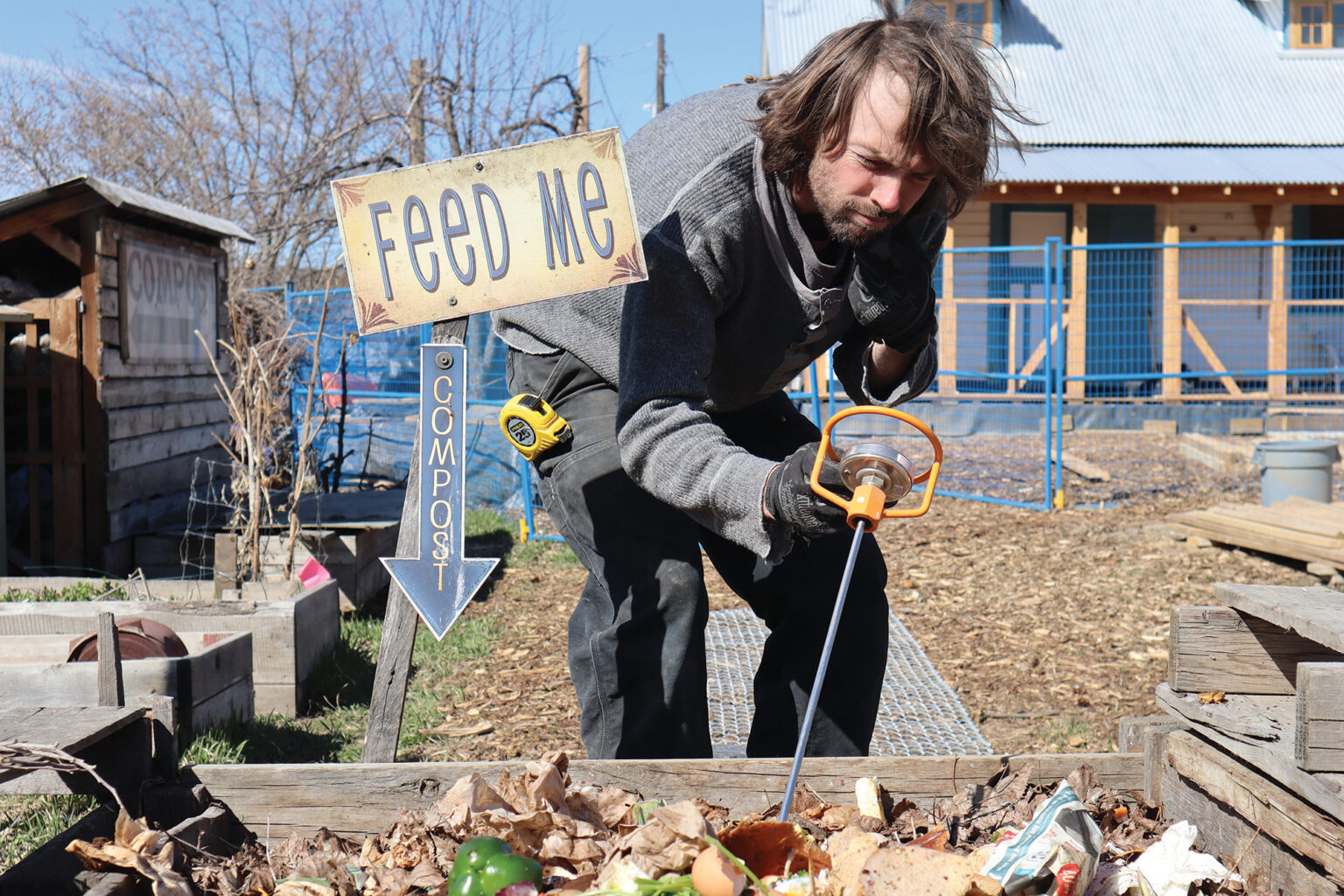 Oliver Berger, the Black Goldsmith, aka ‘composteur’, ranching his microorganisms and checking the temperature of the compost at the public drop-off bins at the Potato House in Williams Lake. Photo: Lisa Bland
Share
Facebook Twitter LinkedIn Pinterest Email

Some people grow food, others raise animals, this self-appointed ‘composteur’ focuses on the smaller things in the agricultural world: worms, centipedes, pill bugs, fungus, beneficial bacteria—all the macro and microorganisms.

His livestock grazes on mountains of leftovers from our modern world. With substantial food scraps and ample yard waste the perfect paddock is created, and these little buggers love it. The living conditions are excellent: they’ve got food, they’ve got warmth, they’ve got oxygen, and they’ve begun making more of themselves. That is when things start to get a little heated.
As consumption and reproduction ramp up, thus begins the stage of decomposing the surrounding organic matter, turning it into a usable soil amendment—the first step in creating the Original Black Gold.

At a certain point, when the herd has over-consumed its surroundings and is running out of air, food, or moisture, things start to cool down. It is now the perfect opportunity for the heavy-duty, human-powered shovel or pitchfork to step through the gates. With aggressive stabbing and throwing, the environment gets agitated, rotated, and revived with some oxygen and water, if needed. Fresh food has worked its way to the inside now, and the microbe family is happy and continues to thrive.
This Black Goldsmith rinses and repeats this agitation process a few more times for his underground family over the course of the next few months.

Finally, at some point his micro army of decomposers has consumed all it can. Reproduction reduces rapidly, and the livestock moves onward or begins to die away.

These can be viewed as sad days; however, we often hear this soil nerd repeat the phrase…
“The end of an era is always the beginning of a new one.”

The by-product of the livestock’s work now begins a maturation stage, which means it is on the final stretch to becoming this rancher’s main cash crop—a healthy, nutrient-rich, living, soil amendment.
Now the rancher has shepherded his flock onto a new batch of feed that just came in, and he observes on his thermometer-staff how they are enjoying it.

Either way, this rancher geeks out in the world beneath our feet. You know how when you dunk your head underwater, you see a whole new living world submerged under there? He wants to do the same thing, but into the ground. He might just end up with a hefty bruise on his head, unless his inner worm kicks in… then he’ll slither his way into the black depths of the underworld. -GG

Oliver Berger is a composteur/microorganism rancher at The Potato House Project in Williams Lake. He cares lovingly for his herd, and in return, it produces Black Gold–a rich and luscious soil amendment produced from the community’s public compost drop-off and sold to raise funds for community education and resources through The Potato House Project. It is a little-known fact that Oliver’s spirit animal is the mighty earthworm.

No Time Left to Waste: The Zero Waste Birth

No Time Left To Waste: #TrashtalkTuesdays