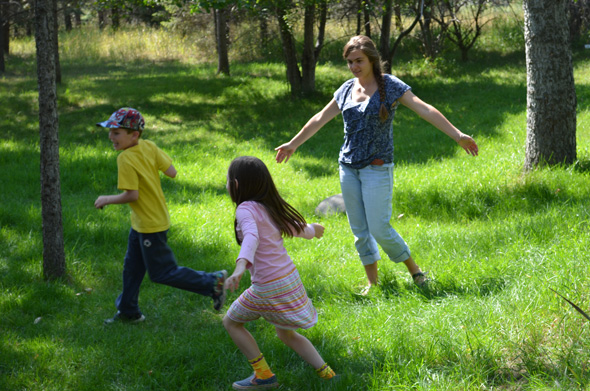 “I found one!” calls out one enthusiastic boy to another after discovering a large beetle crawling past a rock. “I never knew they were so hairy,” remarks a girl peering at a caterpillar through the lens of a magnifying glass.

These are common responses from children enrolled in Scout Island’s programs in Williams Lake.

Children and adults learn about the tiny lives of salamanders and worms and about the larger lives of foxes and bears. They learn about native plants, trees, lakes, and marshes and the important role they play in all life. They also learn to enjoy, cherish, admire, and respect all of Earth’s wonders upon which humans and other species depend.

“Our hopes for the future are that children and families and people of all ages continue to connect with nature, understand their role in it and their responsibility to care for it,” said biologist, naturalist, and environmentalist Sue Hemphill, who has been an environmental educator at Scout Island Nature Centre for 10 years. “Nature is not something to just serve us. Our goal is to show people how to be a part of it so we don’t disrupt that fine balance of nature.”

Anna Roberts, a founding member of Scout Island Nature Centre, recognized the importance of exploratory learning and children being outdoors.

According to its website, Scout Island offers a range of programs all year long for schools, families, children, and adults. In some programs, children become naturalists and scientists. Using microscopes and aquariums they develop hands-on skills, as well as curiosity, wonder, appreciation, responsibility, and a commitment to nature and wildlife. Nature talks take place regularly, offering inspiring and educational lectures to adults.

School programs are offered for students in Kindergarten to grade 12, with many classes taking field trips to the dairy fields or river valley.

There are also a number of exploratory and group programs at Scout Island, which is also often used as a nature-fun venue for birthday parties, other celebrations, and even sleepovers.

School programs are designed by Hemphill and other nature educators, but they can be tailored to suit teacher requests.

“We have set programs depending on the season,” Hemphill said, adding while the programs include in-class time focusing on owls, raptors, and bats, students also spend a good deal of time outside.

“The goal is two-fold: one is to give the children an outdoor connection to nature but also to model for the teachers to do that on their own because a one-time visit to us is not enough to meet the needs of children to be outdoors.”

This year the nature centre will fund a half-time outdoor education resource teacher, Frances McCoubrey, through the school district.

Not only will McCoubrey provide programs to children but she will also help teachers learn how to educate outdoors, too, whether it’s to work on science, literacy, or other subjects.

“Scout Island thinks this is so important to be happening and we would like to have a school district teacher being the leader of this,” Hemphill said. “This is why we’ve offered the money for this year.”

Hemphill is passionate about educating outside, as she recognizes the importance of the natural world to everyone.

Scout Island is also the place to go for many to relax and regain their composure, as it offers a natural retreat for people and wildlife alike.”

“Because I have an interest in a healthy environment, I know that it doesn’t do any good to give people a bunch of facts on how our actions hurt the environment. First people have to connect and feel part of it. You can do that with adults who haven’t had a chance to connect, but we shouldn’t lose our chance with children,” she said.

Hemphill has seen children carry the love of the natural world into adulthood. She knows a woman who formerly attended Scout Island’s programs in elementary school and high school and later became part of the centre’s summer staff. Now she teaches at Scout Island and her children are also enrolled in its programs.

Scout Island is also the place to go for many to relax and regain their composure, as it offers a natural retreat for people and wildlife alike.

“People use it all hours of the day and night,” said Hemphill. “They feel safe there, and I hear over and over, ‘I have to come here and slow down, to reset myself for the day.’”

Being on the migration route, Scout Island is important to birds.

“We are a major flythrough so there is a load of migratory birds that need to stop there,” said Hemphill. “You’ve got waterfowl going north and south. Everybody loves the pelicans.”

While the pelicans nest at Puntzi and Stum lakes, they feed at Williams Lake, which is essential to their health.

She recalled a fall morning several years ago when there were thousands of birds at Scout Island.

“There was so much bird noise and I was wondering what was going on and it just so happened so many birds came in that night. It was a complete cacophony of sounds.”

Looking after Scout Island takes a lot of volunteer time and effort. Members of the Williams Lake Field Naturalists, a non-profit group that keeps it going, act as administrators, fundraisers, naturalist experts for the community, and labourers. Williams Lake Field Naturalist members and other community members log 4,000 hours per year in volunteer time to help it thrive.

Volunteers have been working hard on the caretaker’s house. It has received a new roof and now new insulation, windows, and siding, with financial support for materials from the City and Cariboo Regional District.

The north marsh has a new trail, thanks to a joint effort with the Williams Lake Indian Band, a new bridge to the far island, and boardwalks on the Bull Rush and Willow trails, all thanks to volunteers and the community.

For more information on Scout Island’s programs and events, as well as ways to offer it support, visit www.scoutislandnaturecentre.ca

Erin Hitchcock is a freelance journalist and stay-at-home mom who enjoys vegetarian cooking, gardening, and spending time with her family in nature.