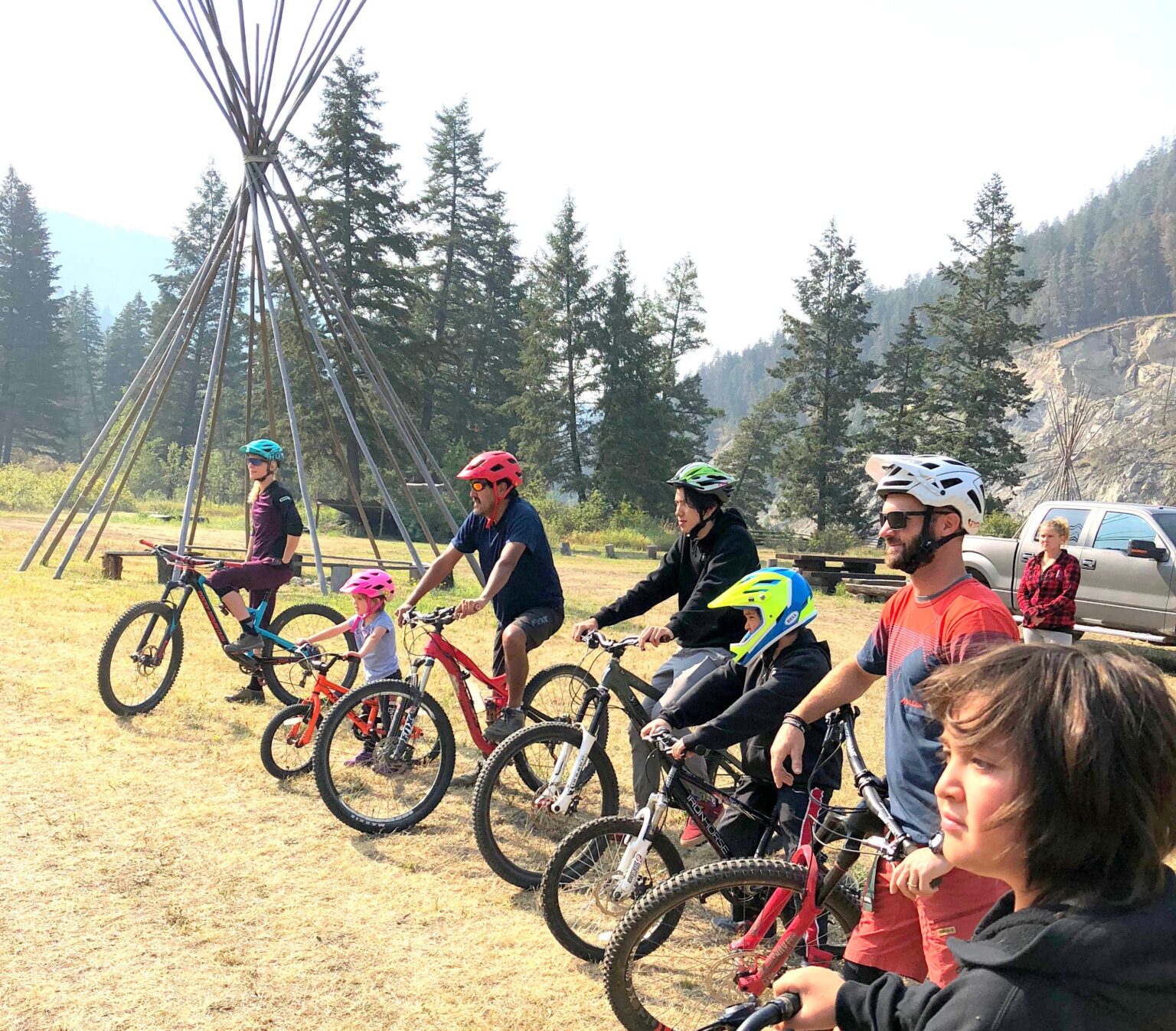 The trail cuts down through a thin grove of burnt and blackened birch and poplar trees that remain standing from the wildfires that burned through the Cariboo Chilcotin Region in 2017. Spindly, leaning, ready to fall, their bark black and shriveled like skin peeling off in sheets, exposing the rotten dead wood. My friend Thomas Schoen and I are leading a group of youth from the Xat’sull First Nation on a mountain bike ride down the Soda Creek trails located above Highway 97 and the Xat’sull Heritage Village just north of Williams Lake. The trail beneath our tires is dust and ash. It’s easy to see the destruction and feel a knot in your stomach and wonder if the land can heal, but there is new growth, alder and shrubs pushing up in bright greens, reds, and yellows, exposing the resilience of the forest.

For the previous three years Thomas and myself, as part of First Journey Trails and the Aboriginal Youth Mountain Bike Program (AYMBP), have partnered with the Xat’sull First Nation to develop a 30-km network of single track nature trails. Our goal was to provide opportunities for their people to get outdoors and to attract tourists to the community. By all counts it’s been a success. Numerous youth have gotten jobs and training, people are out walking and hiking, and riders are coming from all over the province. The community is proud of their youth and the trails they built. However, the biggest impacts would be revealed by the wildfires.

During the summer of 2017, like so many people throughout the province I watched in horror as the fires spread across the region claiming homes, lives, and livelihoods. The fires impacted the Xat’sull particularly hard, threatening homes and infrastructure, and forcing the evacuation of the community for more than a month. I was also worried about the trails we had built. Would they be lost? What would it mean for the community and the people who used them?

As the fires subsided and the smoke cleared I received a call from Thomas, “The trails are still there!” His excitement and relief crackled through the phone. “The forest is burned, ash everywhere, but the trails are still there.” Indeed, across the Cariboo Region, only three trails in total were lost. But the most important discovery came when we finally reconnected with our friends in Xat’sull.

“No one got sick,” was the first thing an elder told me. “With our people walking, running, and cycling, when the fires came we were healthy and ready.” The trails had enhanced the capacity of the community to respond to the crisis, and, displaced to centres in Prince George where conditions of poor health, trauma, and stress can compromise immunity leading to medical complications, sickness, and mortality, no one had fallen ill. “Now we’re all home safe and we can recover and move on,” the elder stated with the defiant resolve that captures the spirit of people and communities across the region.

Other benefits of the trails continued to emerge. A number of the young men and women who had received training and worked on the trail crews managed to secure employment as part of the regional fire response. Trail building had provided them with the skills, stamina, and discipline required to join the fire crews and fight to protect their communities.

When the community returned, they held a dinner and party to celebrate the trails and their community members’ safe return. They walked and cycled the trail in a show of strength and solidarity.

The trails had emerged as a source of strength and resilience.

Inspired by these stories, the AYMBP formed a partnership with the Canadian Red Cross, providing trail building training workshops to First Nations across the region.

Arriving at the bottom of the trail, the youth laughing and hollering with joy behind us, Thomas and I watch as they grab their tools and head back out on to the trails for an afternoon of building. Even with the smoke and haze in the hills around us, I feel a sense of hope that we’ve found a small way that we can build a pathway to recovery and resilience.

Patrick Lucas is a mountain biker, writer, storyteller, community planner, and the founder of the Aboriginal Youth Mountain Bike Program. When he’s not stuck at his computer he can be found wandering the trails throughout BC.