Who Are We, Where Are We Going? 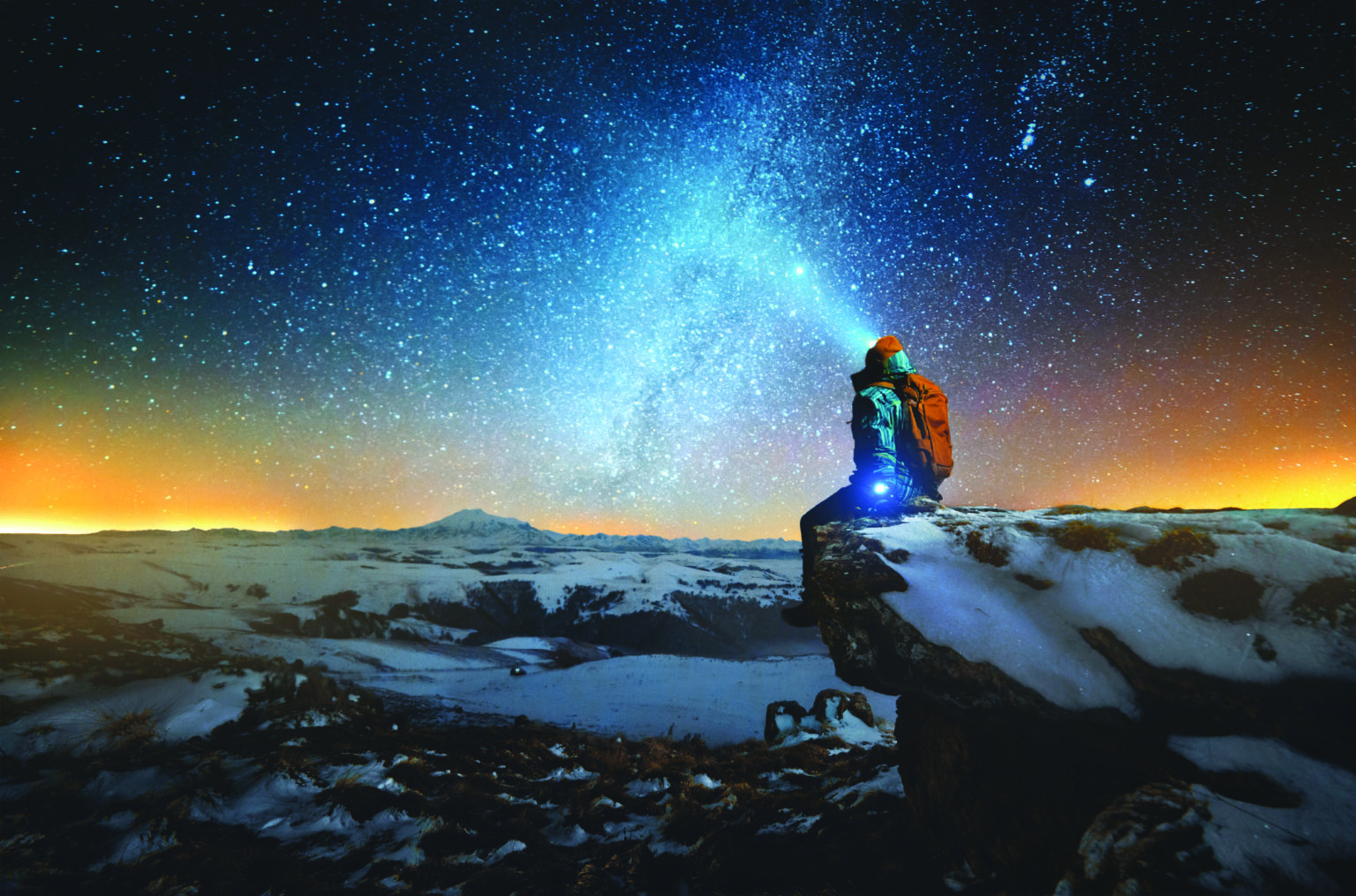 Night winter landscape a man with a backpack and a lantern on his head sits on a rock in the mountains in winter against the background of a mountain and a winter starry sky and the Milky Way.
Share
Facebook Twitter LinkedIn Pinterest Email

Who are we? And where are we going on this tiny planet of ours, this bright sparkle of life in a Universe so ridiculously vast? It’s a question worth exploring, if you have ten minutes in your busy COVID day.

Almost all scientists assume that the Universe is a solidly material realm, consisting of packages of atoms that have, by the happenstance of chance, turned themselves into polar bears and poets. We may have come from stardust, but we have no inherent direction or purpose. Where are we going? You might as well ask what a stone wants for breakfast.

Furthermore, due to the implacable second law of thermodynamics, all heat must dissipate, everything organized must collapse, and the Universe must end up as a pile of disaggregated garbage awaiting the recycling truck from another Universe.

This conjecture can be blown away like thistledown in a breeze by one simple truth, however: that we have consciousness, even though most scientists haven’t a clue where it comes from. If you ask one, she may say it’s an expression of the brain’s neuro-complexity, even though no research backs this up. Or she may cough and try to change the subject.

A few scientists have come to another conclusion, however. They say that everything that exists possesses consciousness. Pan-psychism, they call it. Strip away all thoughts, feelings, sounds, and sensations, and we are left with pure beingness. And having consciousness, we have the gift of agency.

So, let’s ask those questions again. Who are we? Where are we going? Our long evolutionary story, going back to that stardust, tells us that all units of existence seek to optimize their lived experience. For some this means dedicating everything to raising healthy, happy children. For some it means seeking to dominate and defeat others. For some it means finding a quiet corner to live their life in peace.

Whenever danger has arisen, we—all conscious beings—dig deep into our inner resources and seek ways to survive. Atoms responded by self-organizing successively into molecules, organisms, multi-cellular organisms, plants, animals, and humans with highly complex brains. Today, we are self-organizing to overcome the COVID-19 pandemic.

When facing crisis, every unit of being, from rabbit to rattlesnake, faces a choice: “Should I be selfish, seeking primarily my own survival, or should I be wise and seek the collective survival of the group of which I am a part?” The first way leads the quest for domination over others; the second way leads to co-operation with others in pursuit of chosen goals.

We inherit genes and we acquire cultural habits for both sets of behaviour. Our primate ancestors lived in clans ruled by alphamales, using domination and hierarchy. Our hunter-gatherer ancestors chose to resist domination, living in egalitarian clans shaped by co-operation. With the development of agriculture, most human settlements returned to cultures of domination, which have shaped most of our history.

The choice is playing out today right before our eyes. On the one hand there are people seeking to survive the pandemic by acting co-operatively, following the recommended guidelines and being very cautious about re-opening the economy. On the other hand, there are those angry that their personal rights are being trampled and searching under every stone for an alternative explanation for the pandemic that might justify their anger.

Who are we? Where are we going? From a co-operative perspective, we are organizing to defeat the pandemic. We could go on to overcome the climate emergency, retool our economies with renewable energy and organic farming, work to heal Nature’s multitudinous wounds, and develop ways to live within the ecological limits of the Earth, seeking social and collective well-being rather than yet more economic growth. We could learn to live in harmony with Nature. We could craft ourselves a new ecological civilization. That should keep us busy for the next few hundred years. Beyond that, who knows?

Alas, this is only half the story. While most people want to co-operate to build a better future for all, Nature included, others want to live in a world in which they and their families dominate, along, perhaps, with the race or religion they have embraced, to the exclusion of others.

Find this article and many other articles about climate, energy, a new economy, nature, politics, and more on Guy Dauncey’s website, The Practical Utopian.

Guy Dauncey is the author of ten books, including The Climate Challenge: 101 Solutions to Global Warming and an ecotopian novel set in the year 2032: Journey to the Future: A Better World is Possible. His website is www.thepracticalutopian.ca