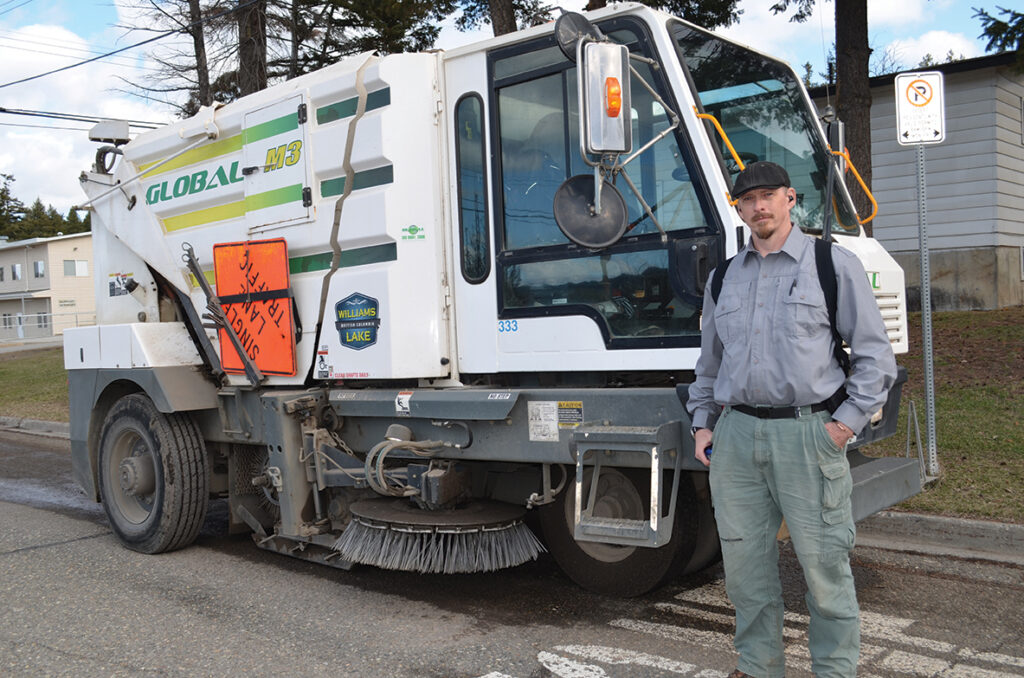 Tim Starlund, operator of the City of Williams Lake's mechanical street sweeper, which is used to pick up sand, gravel, and other debris throughout the city. Photo: Erin Hitchcock
Share
Facebook Twitter LinkedIn Pinterest Email

Road dust is impossible to avoid, especially in communities that need to keep winter roads from being slippery and unsafe.

However, in addition to residual sand, gravel, and salt, particulate matter included in road dust can be harmful to our health.

According to a 2017 study published in the Journal of the Air & Waste Management Association, titled, “Seasonal ambient particulate matter and population health outcomes among communities impacted by road dust in British Columbia, Canada,” as road dust gets dispersed into the air, it can contribute to health issues and increase mortality rates.

“Non-accidental mortality was strongly associated with daily particulate matter (PM) concentrations in the road dust season,” the study says. “Elevated effects were observed in the communities of Smithers, Quesnel, and Williams Lake, all of which are routinely affected by spring road dust advisories.”

The study, which analyzes particulates in seven BC communities, explains that both “short- and long-term exposure to PM pollution is detrimental to cardiopulmonary health,” with some leading to an increased risk of sudden cardiac arrest and arrhythmia, while also exacerbating asthma and other respiratory conditions.

Removing the debris without creating a lot of dust requires a strategic response. Temperatures need to remain high enough so further sand and gravel is no longer needed for icy roads, and so conditions aren’t too dry or too wet, said Matt Sutherland, manager of public works for the City of Williams Lake.

“It’s a dusty, dirty job,” Sutherland said. “You create dust clouds if you’re not using enough moisture, but if you use too much you don’t pick it up. It just turns to mud, so it’s a really fine line.”

He said the city uses a street sweeper with a mechanical broom to remove aggregate used in the winter. It picks up the gravel, sand, salt, and other debris and puts it in a hopper before piling it. The material then gets picked up and hauled to the landfill for cover later. It also has two broom attachments that run on the front of a wheel loader, one of which has a bucket. The city also uses calcium chloride to help keep dust down and washes the sidewalks to remove salt residue and fine dust and sand, with sweeping measures taking place until winter again.

Mick Jones, supervisor of streets operations for the City of Prince George, said that about a decade ago Prince George made changes to its aggregate in the downtown core, which has helped to reduce road dust.

He said it uses predominately small, fractured rock with little to no sand particles and, when feasible, flushes and washes away fugitive particulates after sweeping.

“The area that has probably made the biggest impact is the changes to the way that roads are swept and maintained, and that’s outlined in the Clean Air bylaw,” Menounos said, adding roads, lots, industrial yards, and driveways need to be moistened before sweeping. “That applies not just to city roadways but to anyone sweeping surfaces, like parking lot maintenance.”

She said the burning of yard waste is also prohibited in Prince George, as is the use of woodstoves during a dust advisory unless they’re the only source of heat.

Williams Lake doesn’t have a Clean Air bylaw but a section in its Good Neighbour bylaw addresses dust escaping from someone’s property, and burning of yard waste is also prohibited in the city, according to the city’s bylaw department.