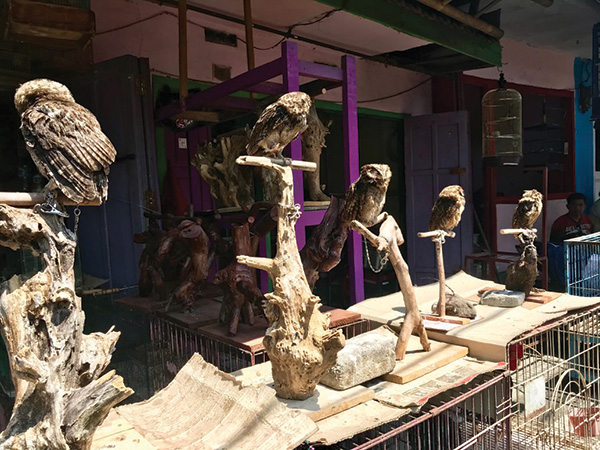 Illegal and unsustainable wildlife trade poses an urgent threat to an increasingly long list of animal species around the world. In many cases, it is the primary threat, though this is often not recognized or addressed. Trafficking, in combination with habitat loss and other threats, has led to population declines for a variety of species, and sadly, the extinction of some. Many more will become extinct soon if current trends continue.

Few people realize the scale of the illegal trade—it is comparable to the global trade in drugs, arms, and humans, and worth billions of dollars annually. Animals are sourced, often in enormous volumes, to supply demand for wildlife used for meat, in medicines, as ornamental and luxury goods, and as pets. While some are sourced in a legal and sustainable manner, many are not. Unfortunately, the consumer is often unaware that their purchase and use of animals, or the parts and products derived from animals, may be supporting organized crime activities and contributing to the decimation of wild populations. This means the pet turtle you bought may have been falsely declared as being captive bred and was laundered into the global pet market. It means the marine fish you have in your tank may have been captured using cyanide. It means the ivory trinket you bought while on holiday might be from a poached elephant and you may have violated national and international laws while bringing it home. A lack of transparency and traceability systems means you would most likely not be able to determine if your python skin purse or shoes came from a legally or illegally sourced snake.

Many species are often traded openly in the now-famous wet markets in Asia, with some suspected to be linked to the COVID-19 pandemic. These wet markets are filled with live animals that are slaughtered on the spot, and with raw meat lying on counter tops or on plastic laid on the ground. Animals from near and far are packed into small cages or stacked in tubs and containers, still alive. In markets like these, stress levels are high and immunity levels are low, providing ideal conditions for the transfer of viruses, parasites, and more. Wild meat is sold and consumed around the world, and while the latest pandemic may have come from China, the next could come from anywhere—and there will be a next time, as long as wildlife trade is permitted in the manner it is now.

While the trade in some species is regulated by domestic legislation, and some, though far fewer, by the Convention on International Trade in Endangered Species of Wild Fauna and Flora (CITES), many are not, and trade in these is largely a free-for-all. The main reason behind this lack of legal protection from over-exploitation is a sheer lack of knowledge and information.

Corruption, complacency, and lack of general awareness and concern are among the greatest hurdles in reducing levels of illegal and unsustainable trade. Low levels of political will, weak legislation, and ineffective enforcement efforts hamper efforts to stem this trade. A lack of support for efforts to tackle the illegal and unsustainable wildlife trade is a further impediment. Increasing affluence and easy access to global markets, including the rapidly growing online trade in wildlife, is exerting more pressure on these species. While the plight of some species is well-documented, for instance that of tigers and black rhinos, the declines of lesser-known species, such as the Sumatran serow, pig-nosed turtle, and hairy-nosed otter–species most have never heard of–occurs largely unnoticed. For the little-known species, the dearth of evidence continues to impede conservation efforts, enables illegal trade, and undermines efforts to achieve sustainable trade in species that may be suitable for harvest and commercial trade.

It is because of the urgent need for action to protect these lesser-known species that the Monitor Conservation Research Society (Monitor) came to be. Monitor was established in 2017 to focus especially on lesser-known species (standing up for the underdogs!) and issues in wildlife trade. We believe that sound research, strong policies, and effective enforcement efforts at national and international levels are essential to achieving our primary goal: the reduction of illegal and unsustainable wildlife trade. Monitor aims to fill information voids related to poaching and trafficking and to catalyze evidence-based conservation interventions, policy changes, and enforcement actions. We also strive to find ways in which (CITES) can be of more benefit to these lesser-known species. Through the provision of sound research, useful recommendations, and effective conservation interventions, we believe we can affect positive change for these species.

Monitor is made up of a small team of dedicated experts with decades of experience in researching, analysing data, and publishing peer-reviewed papers on the global wildlife trade. We believe in making our findings public and seeing these findings put to good use. We believe that evidence and information is key to informing policy changes, catalyzing enforcement actions, guiding conservation efforts, and raising concern among the public.

Chris R. Shepherd is the executive director of the Monitor Conservation Research Society (Monitor).To learn more about Monitor’s work and to read our publications, follow our campaigns, or financially support Monitor’s efforts, please check out our website at https://mcrsociety.org/ or Facebook page at www.facebook.com/mcrsociety/